Todd, Charles. A Long Shadow. Inspector Ian Rutledge survived WWI and after a period of hospitalization for shell shock, returns to Scotland Yard. Only now he carries with him survivor's guilt and the voice of Hamish Macleod, a young Scots soldier (a ghost or a result of the lasting effects of shell shock on Rutledge). These historical mysteries are always concerned with the effect of the war on those who participated and survived and on those who loved them.

Alexander, Tasha. And Only to Deceive. Fast reading mystery involving forged Greek artifacts in 19th century London. Or a romance novel..so sue me. :)

Beauman, Sally. The Sisters Mortland. Divided into sections, Part I is "Five of Cups" and introduces Maisie, gives some background, and introduces the main characters, and....no, I'm not saying any more. Each section is titled from a Tarot card and the chapters within the section relate to the theme: The Lovers, The Tower, Ten of Swords, etc. One chapter within Part II ("The Lovers") is titled "Ancestral Voices"...think Coleridge and "Kubla Khan" and "...prophesying war" -- in fact, the entire poem works well with the novel (which is no accident because this author controls every aspect of the narrative).

In Maisie's section, she says: "I don't want to watch this process--and I'm not allowed to do so anyway. I'm too young for family warfare. Not too young to be told all the details on the way home, or too young to have them repeatedly for months afterward, but too young to actually witness them--Gramps has decreed."

Enough. I hope someone will read this novel and comment because ...well, I'm recommending this one, too, and want another opinion. On a roll, lately. And as I preferred Williams' novel to Tyler's, this novel is superior to Ian McEwan's Atonement...and contains some similarities.

Williams, Sheila. Dancing on the Edge of the Roof. What a fun read! Am I susceptible to the idea of grown women running away from home? Yes. Ann Tyler's Ladder of Years also covered this topic, but in a completely different and less satisfactory way. Williams novel is one in which the heroine grows, expands, becomes. I'm "with" Juanita (our heroine) when she says: "When I read, it's like I leave myself, leave my body, and especially leave my life behind and I fly away." This sums up my experience and explains the importance of reading in my life. And more: "In these books I read, Juanita Louis disappears and becomes a woman who walks the streets of the Forbidden City, or rides out west with the Apache warriorors. I get to talk with the Pygmy and find out what they know, or dress in designer clothes and run a business...." Our heroine discovers reading and gains courage and an adventurous outlook that enables her to leave home and find a new life. Is it fantasy? Well, yeah, but so much fun. I love Juanita, and my thanks to Karoda for the recommendation.

Gladwell, Malcolm. The Tipping Point. A truly fascinating look at the social phenomenon that explains how a product or an idea can blossom or explode in a short time. "Ideas and products and messages and behaviors spread just like viruses do." He compares such things as fashion trends and crime waves to epidemics. And makes a clear and cogent case with lots of fascinating examples. According to Gladwell, there is a "basic, underlying pattern" (and after reading just a few pages, you will probably agree). Here, without examples, are the three characteristics: behavior is contagious (well, one example - yawning), a small cause can result in a BIG effect, and change is rapid, occurring in one dramatic moment (the tipping point). The book is absolutely logical and remarkably entertaining.

Schechter, Harold. The Tell-Tale Corpse. Edgar Allan Poe takes his wife to Boston in search of a cure and to aid his friend P.T. Barnum in acquiring some "curiosities." He is drawn into a series of murders--as he has in Schechter's previous novels featuring Poe as detective--and becomes the guest of the Alcott family and charming "Louy".

Kellerman, Faye. Straight into Darkness. Some interesting historical aspects of Munich in 1929 as Hitler is gathering power after the failure of the Beer Hall Putsch of 1923. Antisemitism, brown shirt thugs, politcal maneuverings and corruption are much more horrifying than the murder mystery. 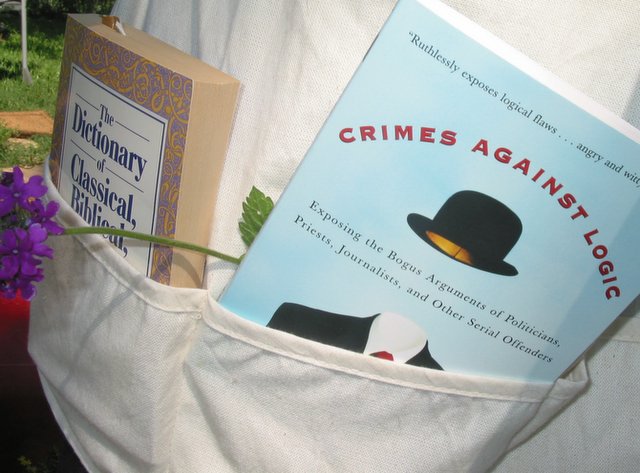 Whyte, Jamie. Crimes Against Logic: Exposing the Bogus Arguments of Policitican, Priests, Journalists, and Other Serial Offenders. Another look at reasoning fallacies with plenty of examples. I always enjoy this sort of thing (although a frequent offender and dupe of several). Not that the book was as informative or amusing as promised, but this quote about being "entitled to my/your opinion"appeals to me: "...a mindset that increasingly impedes the free flow of ideas and their robust assessment. Many people seem to feel that their opinions are somehow sacred, so that everyone else is obliged to handle them with great care. When confronted with counterarguments, they do not pause and wonder if they might be wrong after all. They take offense. ...a serious obstacle to those who wish to get at the truth."

Reuben, Shelly. Tabula Rasa. Hmmm. What to say? I enjoyed it, but found it a mix of fantasy and magical realism in what is purported to be a mystery. Is that possible? I don't know... I thought the characters were fun, but they really seemed to be something out of a witty fairy tale or maybe a kind of Nick and Nora effect? Nick and Nora Charles, that is, not the sleep wear (which I do like!).

Atkinson, Kate. Case Histories. Three seemingly unrelated and unsolved tragedies begin to unravel themselves as Jackson Brodie unintentionally finds that they were knit together in unexpected ways that no one suspected. A most unusual detective story that recounts human failures and human determination and, in the end, a kind of redemptive solution.

Goodman, Carol. The Ghost Orchid. I read The Lake of Dead Languages several years ago and enjoyed it. The plot of The Ghost Orchid focuses on a young novelist (with psychic abilities and a medium for a mother) who has been invited to an artist's retreat in a Victorian mansion and finds the past intruding on the present. Ghosts seeking closure, Munchausen by Proxy, fountains and grottos, tunnels and spy holes. Past is Present...or whatever.

Kellerman, Jonathan. Gone. Typical Kellerman. Lurid, but fast reading. I used to enjoy his books, but each one seems to attempt to "out do" the previous with graphic, sensational stuffing and little meat.

Gray, John MacLachlan. White Stone Day. Lewis Carroll wrote the following words in his diary: "I mark this day especially with a White Stone." Since the author used much from Lewis Carroll's life, times, and surroundings as inspiration for this murder mystery, it is appropriate, perhaps, that he took the title from this quote. A Victorian mystery that examines the underside of the proper Victorian society, it contains 2 darkly humorous villains in Mr. Robin and Mr. Weeks, a less than entirely sympathetic protagonist in Edmund Whitty, a creative and courageous child-woman in Emma, an amoral duke, and various other characters, mostly unattractive. The back jacket compares this novel to Caleb Carr's The Alienist...there are similarities in style and content.

Karon, Jan. Out to Canaan. The fourth in the Mitford Series. I'm still enjoying these.

Karon, Jan. These High, Green Hills. The third in the Mitford Series.
Posted by jenclair at 9:28 PM 12 comments: