On the Royal Mile, all kinds of performances are advertised by the actors in costume.  We saw this one for Hamlet: House of Horror, and we loved the music, took a flyer, and planned to attend. 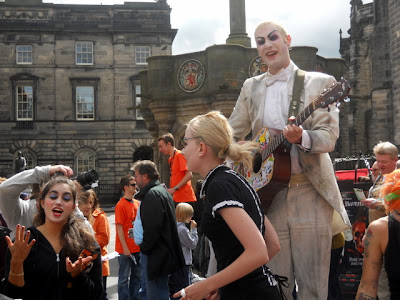 The girls dancing to the music had just given a preview for another show, I think.  They were having a great time!


Hamlet: House of Horror was one of the best shows (and that isn't an easy choice as we enjoyed all of them!) shows we saw in Edinburgh.  It was a thrilling musical adaptation of Hamlet that was fascinating from beginning to the tableaux at the conclusion!

.
After the show, we were having a drink in the courtyard.  After a while, two of the cast members, Claudius (George Rowell) and Hortatio (Hugh Pickering), and  George's mother came down for a drink, too.  We asked if they minded if we took some pictures, and they were so sweet and friendly!  Below, George rolled down his sleeves and fastened the cuffs, and Hugh prepared to take out the ponytail and fluff his hair straight up.  We weren't asking to disrupt their comfortable evening, but they insisted. 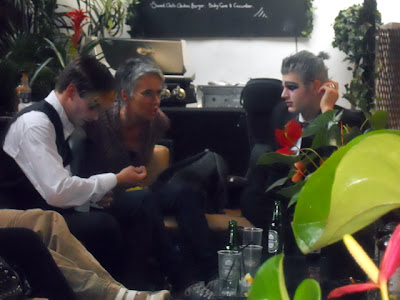 Then they volunteered to pose with Erin and Amelia, who-- grown women that they are-- were as thrilled as teenagers. 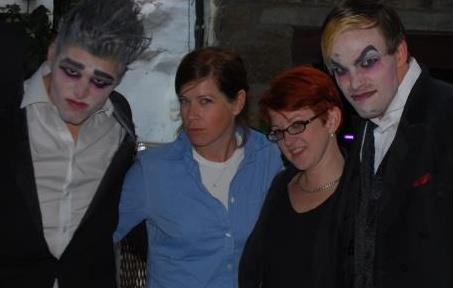 They were all trying to look evil.  The show is an active one and the makeup (which takes hours to apply) has a bit of a melted look.

Hugh and George stayed and had a drink with us, filling us in on a lot of stuff about the show.  Hamlet (Louis Lunts) stopped by for a minute on his way out.  The show was wonderful, but it was especially nice to know that the cast is wonderful, too!

We saw The Curse of Macbeth on our last night;  it also had interesting staging, but somehow, just missed the mark.  Not that we didn't enjoy it, but despite the intriguing use of the mirrors and the witches, the actors didn't seem to relate to each other.  It was adapted and directed by Max Barton, who played the ghost in Hamlet: House of Horrors.  The play was innovative and creative, and we liked the music, too.

We saw ten shows, maybe eleven in all.  The Real MacGuffin's  Skitsophrenic was very funny and included audience interaction.

How to Survive a Zombie Apocalypse, another audience participation piece, was a lot of fun.  An hour long interactive training seminar teaching ways to survive the imminent Zombie Apocalypse, the "seminar" involved choosing the correct answer to questions.  I survived longer than Erin and Amelia, but only by one question.  We were woefully unprepared for the Apocalypse, but we did learn a few useful tips.  Overall, a great time!  Although, we did wish that we had survived.... 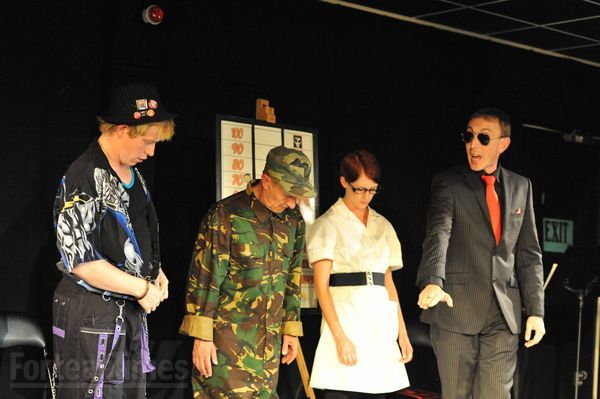 The Kidnapper's Guide was entertaining and funny, with some charming actors.

Poor Jerry-- when incompetent kidnappers discover that no one wants him back, Jerry takes over the kidnapping.

The acting was more natural and the actors were all cute and funny (I especially liked the saucy salsa senorita, Carmen!).  We thought they were American,  their accents were so good, and we were surprised to discover they were from the University of Birmingham. 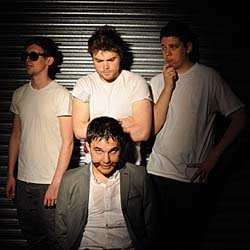 We arrived too late for dinner at the Sheep's Heid Inn, but enjoyed a half pint of Tennant's! 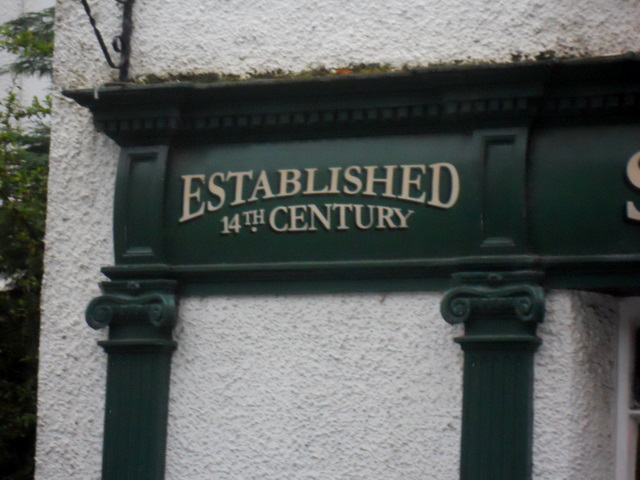 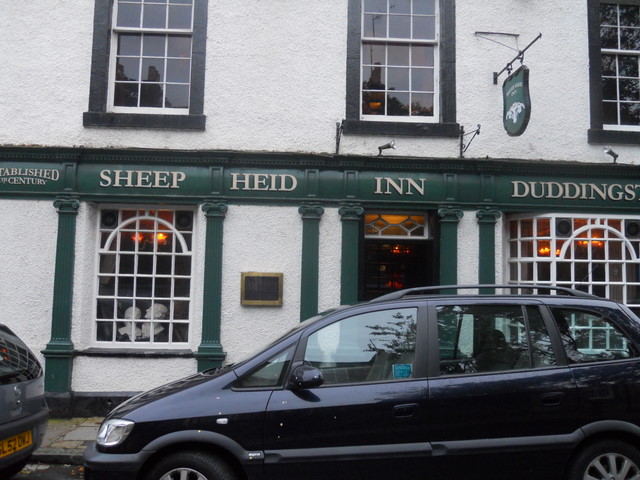 All in all, a great trip with some great shows, a tour of the underground vaults, a visit to the National Museum, and some wonderful meals!

The Nightspinners by Lucretia Grindle

The Nightspinners  is the story of the link between twin sisters Suzannah and Marina deBreem, who as children developed their own wordless language, communicating telepathically by what they called nightspinning.


Suzannah and her sister are no longer close when Marina is murdered.  About 18 months later, Suzannah begins dealing with some strange events: her car door is vandalized, she receives flowers from an anonymous admirer, she is accosted in the laundry room when the lights go out.


Discovering that her sister was stalked in a similar manner before her murder, Suzannah fears the killer may have transferred his interest to her and begins her own investigation.


Definitely suspenseful, there are almost too many people who could be guilty.  Suzannah find it difficult to trust anyone and because she doesn't know the motive, both Suzannah and the reader have difficulty eliminating suspects.


Suzannah is not always sympathetic, but the novel is a quick read and entertaining.  I recently read a positive review of Grindle's The Faces of Angels, but the library didn't have it.  I'll look for more by Grindle.

The Diviner's Tale by Bradford Morrow

The Diviner's Tale   is the story of Cassandra Brooks, a dowser (or diviner) who uses instruments such as a forked branch to locate water.

"The dowsing rod is a simple instrument which shows the reaction of the human nervous system to certain factors which are unknown to us at this time." -Albert Einstein


Cassandra is dowsing for water when she sees the body of a girl hanging from a tree, but when she returns with the local authorities, the body has vanished.  On a return visit the next day, a dazed and confused girl wanders from the woods.  She is not the girl Cassandra saw, but she is a girl that has been reported missing, and the Sheriff is able to contact her family.

Suspense, supernatural, and mystery are all rolled into one.  The information about dowsing is interesting, the mystery is reasonably involving.  Nice for a stormy night (which I would certainly appreciate about now).


In his Acknowledgements, Morrow mentions V.S. Ramachandran's A Brief Tour of Human Consciousness (Ramachandran is a neuroscientist whose works are part of the cannon of brain and neuroscience) and  Andrew Lang's Custom and Myth (Lang [1844-1912] is the author of The Red Fairy Book, The Blue Fairy Book, etc., revered among those who love and study fairy tales; he contributed to the fields of anthropology, folklore, and myth; he was also a Homeric scholar and contributed to various translations of The Iliad and The Odyssey).


As is often the case, the sidelines are as interesting as the story.

Drink the Tea by Thomas Kaufman

Drink the Tea by Thomas Kaufman won the PWA Best First Private Eye Novel Competition.  At first, I wasn't sure if I was going to like it, but I found that I liked it very much as I continued reading.

Willis Gidney is a former foster child who is an expert liar and scam artist, but as an adolescent, his association with Shadrack Davies of the D.C. Police teaches him a thing or two about ethics.  Gidney's homelessness and childhood traumas still haunt him, but he becomes a private investigator, albeit a struggling one.

When asked to find the daughter of a friend, he becomes involved in a much more serious and dangerous case than the ones to which he is accustomed.  Gidney's back story is skillfully woven into his current adventures, and he becomes more intriguing with each page.

The characters are flawed, but engaging, and none more so than Gidney himself.  As I mentioned, at first, I wasn't not too taken with the novel (a bit hard-boiled), but the development of Gidney's character and the humor lightened the flavor of the book as it progressed.   As I read, the book wormed its way into my good graces, and I look for more from Mr. Kaufman and the rather unusual, but endearing Willis Gidney.

Some new mysteries of interest from Stop Your Killing Me:


The Red Velvet Turnshoe  by Cassandra Clark; Sister Hildegard is on a secret mission to Italy in 1383-- set during the dangerous period of the Hundred Years War and the Black Plague.

Out of the Dawn Light   by Alys Clare; a fourteen-year-old diviner (who can find lost things and dowse for water) is convinced to find a mysterious object.  The first in a series set in 1087.  I like the period.

The Worst Thing  by Aaron Elkins; Brian is a former abductee who is skilled at designing hostage negotiations.  He still has panic attacks and nightmares and relies on Xanax to live a normal life.  A psychological thriller.

Mind's Eye by Hakan Nesser (I recently read one of the Chief Inspector Van Veeteren novels and enjoyed it)
---------
This is the hottest summer.  EVER!  At least in my memory.  Days of 109 degrees;  the ground has heated up so much that it doesn't even cool down much at night.  And no rain.  We are in the midst of pretty serious drought in north Louisiana, not as bad as Texas, but bad.   Burn bans, heat advisories, low water reservoirs.

Reading is an escape!
Posted by jenclair at 8:06 AM 1 comment:

Miss Peregrine's Home for Peculiar Children is a peculiar book.  The unusual vintage photographs from his photo collector friends add such an odd and mysterious element to the story that a great deal of time can be spent just looking at the photographs, again and again.

I think I first read about this on Carl's blog, although I've seen reviews on several blogs since then.  The book is interesting for its use of the weird vintage photographs (only a few have been altered) that form the basis of the story, a great concept because almost everyone can identify with the curiosity engendered by such photographs.

Who were these people, what did they do, who were their family and friends, what eventually happened to them?  Using the photographs to weave a story that relates such unusual images is a nice feat of the imagination, and Ransom Riggs manages to do this.

The book reminds me of both Griffin and Sabine by Nick Bantock and The Invention of Hugo Cabret by Brian Selznick because the visual aspect is as important (or more important) than the story itself.  The illustrations, whether drawings or photographs, are inseparable from the narrative in any of these works.

I finished this a couple of weeks ago and am finally getting around to the review.

A boy who worships his grandfather, Jacob eventually comes to doubt the truth of the fantastic stories with which his grandfather regaled him throughout his boyhood.  However, when his grandfather is killed under mysterious and dreadful circumstances, Jacob discovers how awful it is not to be believed.

Eventually, Jacob decides to follow up certain clues he feels his grandfather has left him and determine whether or not the tales of adventure Jacob loved as a small boy had more than an element of truth. 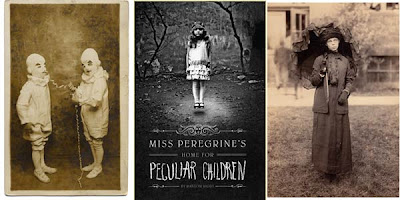 I love the premise of the novel, the photographs, Miss Bird, the peculiar children.  I was not as thrilled by the feeling of a rushed conclusion and a bit of a cliff hanger.  More time spent with the peculiar children, bringing each one to life and letting us linger a bit more with them, would have pleased me.

While I am glad to have a copy of this book (which is printed on fine paper and full of the interesting photos), I'm not sure that in retrospect, it lived up to my expectations.