Bury Your Dead by Louise Penny

There are several different story lines intertwined in Bury Your Dead: a mysterious death in Quebec City where Inspector Gamache is recovering from physical and emotional injuries, flashbacks and references to the events of a tragic operation that resulted in the deaths of several of his men (and his own injuries), and a re-visiting of the closed case in The Brutal Telling.

There are also some minor story lines that explore the social constructs of Quebec City, expand the character of Jean Guy Beauvoir, and explore possibilities about the missing remains of Samuel de Champlain, founder of Quebec.

What I enjoyed most was that the history of Quebec, the information about the social divide of English/French,  and the mystery of Champlain's missing remains were so seamlessly embroidered into the mystery.  It was also nice to see Jean Guy Beauvoir open up a little as he visited Three Pines to look at the closed case involving Olivier a little more closely.

At first, I was confused about Gamache's memories concerning the operation that led to the death of his men and his own injuries, and I wondered if I had missed a book.  No, that story line is revealed slowly through Gamache's thoughts as he continues his emotional healing.

A good read!  In fact, this is my favorite (by far) of the series!

Other reviews:  Book Chase,  So Many Books,

The Hunchback Assignments by Arthur Slade

The Hunchback Assignments is another YA book; this one fits in the steampunk sub-genre of fantasy.

When Mr. Socrates rescues a young hunchback from a traveling Victorian freak show, he is astounded by the child's ugliness, but suspects that his efforts will be rewarded.

He names the child Modo and has him raised in seclusion.  Modo, an extremely bright child, is well-fed and well-educated mostly by a kind governess.  He is also trained in the martial arts by another mysterious associate of Mr. Socrates.  When Modo is fourteen, Mr. Socrates takes him to London for an important test.  Modo is left alone in the unfamiliar city and must survive until contacted again by his mentor.  Initially terrified, the boy uses his native intelligence to find a niche for himself and his unusual talents.

He is then given his first assignment for the covert organization whose goal is to protect Britain at all costs.  On this assignment, Modo meets another young agent, Octavia Milkweed, another young orphan who has also been rescued and well-trained.

Slade has created an interesting cast of characters, including some evil villains, and a plot that is interesting for both the adventure and for the relationships among the characters.

A fun and interesting little book that should appeal to youngsters of all ages!

Other Reviews:  Kailana at The Written World,  Steamed,

The Blue Fox by Sjon

I'm somewhat at a loss to describe The Blue Fox.  It doesn't fit neatly into any one genre.   Fairy Tale, Fable, Myth, Folk Lore, Revenge Tale...

Very short and poetic (the Icelandic author is a poet and lyricist), the book reads quickly and leaves you thinking.  The setting is Iceland in 1883.

Other reviews:  Beauty Is a Sleeping Cat,   Stuck in a Book

Tomorrow When the War Began by John Marsden

Tomorrow When the War Began has been recommended by different bloggers, especially the Aussies!  I loved it.  A very fast moving plot with likable characters.

Ellie and her friends go on a week-long camping trip into a secluded area called Hell.  The area is difficult to access, but once they get there they feel removed from the world.  As it turns out, they are, indeed, removed from the world as they know it.  On their return home, they find one house after another deserted, empty of family, no notes or explanations, and the animals dead or dying of thirst and neglect.

During their absence, their country has been invaded and their loved ones incarcerated.  The teens must work together to survive and discover how to deal with the invaders.  Surrender?  Fight?  They investigate, gather supplies, make plans.  Gradually, they realize that the world they've known will never be the same.

Leaders, sometimes unexpected, emerge as the teens prepare for what they now realize will be a long siege.  Mistakes are made, but they learn to work together and trust the individual strengths of their fellows.  Lots of action and suspense!

I really enjoyed this novel and will be continuing with the series!

Just used the Random Number Generator to choose the Give Away winner.  The winner is #2, Raych of Books I Done Read! 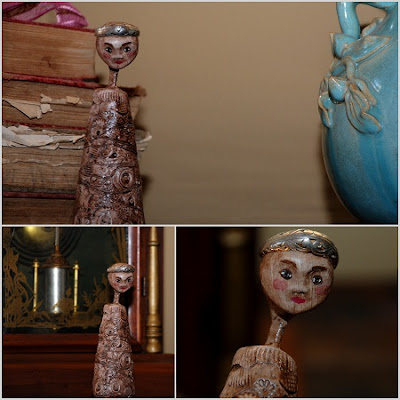 I'll need your address, Raych, and will get this little girl in the mail as soon as I can.  Hope you like her! She is small in stature, but large in heart.
--------------
I've been reading and enjoying my library books, but continue to put off reviews from last week.  I'm going to force myself to a couple tonight, and just keep them short.
Posted by jenclair at 6:50 PM 6 comments:

Library Loot is a weekly event co-hosted by Claire from The Captive Reader and Marg from The Adventures of an Intrepid Reader that encourages bloggers to share the books they’ve checked out from the library. If you’d like to participate, just write up your post-feel free to steal the button-and link it using the Mr. Linky any time during the week. And of course check out what other participants are getting from their libraries! 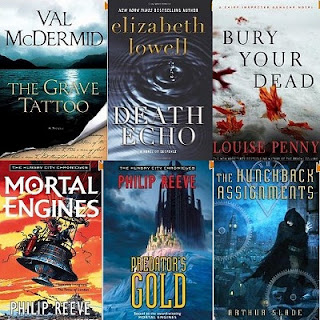 Yesterday was library day for me.  I indulged in a bunch of mysteries and some YA novels that I've been reading about in the blog world.  This is the Library Loot for Friday:


I read The Hunchback Assignments by Slade last night and enjoyed it!

Still haven't finished reviewing books read during the last week, but I'm getting to them gradually.

Don't forget to check this post for the give away.
Posted by jenclair at 9:40 AM 4 comments:

A Conspiracy of Kings by Megan Whalen Turner

A Conspiracy of Kings is the fourth in Turner's series of YA fantasy novels concerning the countries of Attolia, Eddis, and Sounis.

I've loved each of the previous novels, but I when I started this one, I was wondering whether I'd like it as much.  It didn't take long, however, for me to become completely involved with Sophos' story.  I do wish  the gap between reading the previous novels had  been smaller, but that's the way it goes.  At some future time, perhaps I'll sit down and read them all through from the beginning.

Although my favorite will always be the first one, I like the way Turner has taken the characters through their journeys, allowing them to evolve and mature.  Gen remains my favorite character, and I truly look forward to the time in which he seems less bound by his circumstances as King of Attolia and takes a more active part in the story again.

When you've learned to love the characters in the first novels, it is fun to watch them travel the different paths laid out for them.  By changing the focus on the characters, the series widens its horizons.

All right, back to Sophos.  Sophos had disappeared from the scene in the last novel.  As it turns out, his father, disappointed in Sophos' lack of interest in his role as heir to the kingdom of Sounis, has sent his son to an island where he is confined with his mother and sisters.  The hope of his father is that Sophos will abandon his love of poetry and become more interested in ruling his future kingdom.

Then events (avoiding spoilers as much as possible) change Sophos' life forever, and he learns another kind of despair, loses the privileges and responsibilities of his former life, makes friends among a class of people with whom he would never have had the opportunity to mingle, grows in strength and initiative, and finally, is prepared to be the kind of king that Sounis needs.

One of the most difficult things he has to face is the change in his relationship of Gen. Sophos is angered and saddened by Gen's treatment of him, especially since thoughts of Gen's courage and imagination have helped him survive the events he has been through.  On the other hand, his relationship with Eddis grows and supports him.

I recommend this YA series highly.  There is no dumbing down of circumstances, neither is there the tendency to use sex to draw an audience.  Megan Whalen Turner focuses on character, and no one's is perfect.  Friendship and trust must allow for the vagaries of imperfect individuals.  Duty, honor, and courage are not always easily obtained.

Don't forget to check this post for the give away.

An Impartial Witness by Charles Todd

I'm glad I tried An Impartial Witness, second in the Bess Crawford series, by the mother-and-son writing team of Charles Todd.  Although I was disappointed in A Duty to the Dead, this novel was much better.  Not as good as the Ian Rutledge series by the same authors and not as good Jacqueline Winspear's series featuring Maisie Dobbs, but an enjoyable read.

Bess Crawford is a WWI nurse, now stationed in France.  After accompanying severely injured men back to England, she happens to notice a distressed woman at the train station and recognizes her as the wife of one of the men for whom she has cared.

On her return to France, Bess reads a newspaper and learns that the woman was murdered on the same day that Bess saw her taking an emotional leave from the young officer (who was not her husband).  She volunteers her information to Scotland Yard by letter and becomes drawn into the case by her own curiosity.

There are a lot of coincidences and frequent leaves from her nursing station in France, but Bess manages to unravel the mystery with perseverance.  None of the characters are especially well-developed and the historical detail is skimpy, but it is a nice little historical mystery.

Don't forget to check this post for the give away. 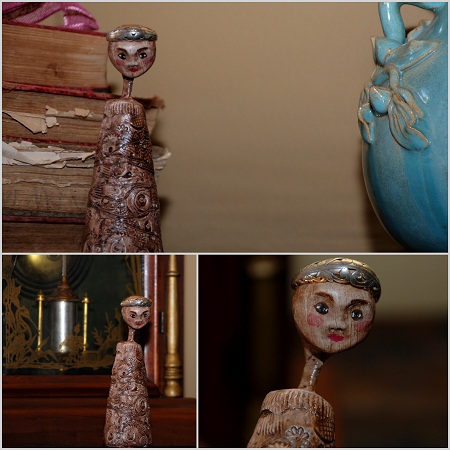 I've finished the guardians and decided to give away a small one on each blog.  This one is just a smidge over 5" tall.  Cloth head, covered with paper clay.  Paper clay body.

All you have to do is leave a comment on this post.  I find all the other requirements on a give away too tedious, especially at this time of year.  On December 6, I'll use the Random Number Generator to select the winner.  Good luck and please be sure that I have a way to contact you if you do win!
Posted by jenclair at 11:27 AM 12 comments:

The Tourist by Olen Steinhaur

The Tourist involves Milo Weaver, a former CIA operative (tourist) who is no longer in the field, but behind a desk.  When he is sent to take down a terrorist whose exploits he has been tracking for years, it seems that the terrorist intended for Milo to be the one who catches up with him.

The terrorist, known as The Tiger, explains he wants Milo to find out who has infected him with AIDS.  Next, Milo is informed that a former partner has been leaking secrets.  Against his better judgment, Milo returns to field work to untangle a web of lies and misdirection.

In spite of the fact that George Clooney bought the film rights and several respected authors gave this one a thumb's up, I wasn't thrilled with it.  I found Milo difficult to believe in and was unable to feel terribly involved with the action.  Actually, there wasn't all that much action.

Nothing new here, and the novel lacked that certain something that allows this reader to enter into the spirit of events, regardless of how unlikely they may be..