I've been over to So Many Books and found this list of books that interest me. I'm adding several of these titles to my wish list and will order some when I return from vacation. I've always loved Emerson, and visiting Stefanie's blog reminds of much of what I enjoyed in Emerson without having to do research myself--but sometimes, I just can't resist the desire for further reading on the Concord group: Emerson, Thoreau, Louisa May Alcott, Margaret Fuller, etc.

I have a copy of Eden's Outcasts: The Story of Louisa May Alcott and Her Father in my TBR stack and have been debating on whether or not to take this one with me to Florida, but it is such a big, thick hardback that it will really need to wait.

Still have a couple of books to review and hope to do that before we leave and have several stalled books -- including The Philosopher's Apprentice which I read avidly and then when almost finished, put aside and read several other books. Susan at Pages Turned is in the process of reading this one, so I'm eager to find out what she thinks.

Things around here have been hectic lately and my mood takes me from one thing to another in a pretty helter-skelter manner. I've been doing some sewing (which - like reading - provides stress relief). My quilting/sewing blog Bayou Quilts has more pics of the sewing adventures, but here are a couple of the cuffs I've been working on lately. 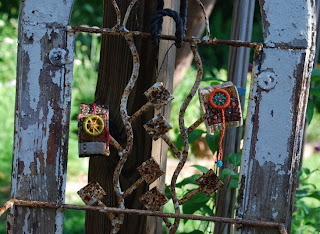 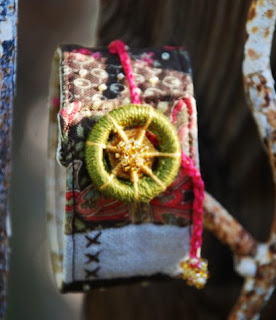 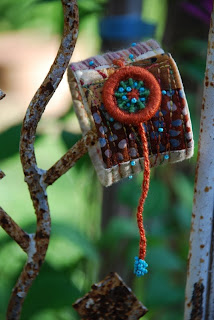 These little cloth shoes are for baby Bryce Eleanor. 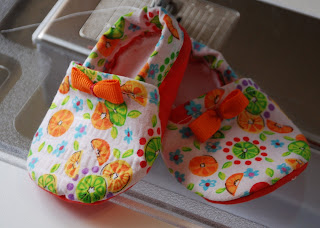 Fun read with charming characters, magic, and romance. The Waverly clan from Bascom, North Carolina, are in possession of a magic apple tree and unique talents. I couldn't put Garden Spells down and although much of it is predictable, that was exactly what I wanted. A feel-good book with likable, if flawed, characters; character development might be a bit light, but suits the fairy-tale atmosphere.

I especially liked Evanelle, the 79 year old aunt who jogs in order to watch the cute behinds of young men and is compelled to give strange, but prophetic gifts. The conclusion is a bit abrupt, but overall, I had a great time with this magical little tale. An evening's read.

I found this one on the library shelf, loved the cover, and remembered that Bookfool had liked it. Her review is here.

Found the premise a bit hard to swallow, but the novel was fast-paced and the legal stuff interesting.

I found this little novel annoying. Jeannie Sterling hosts a late night radio talk show where she, her co-host, and listeners vent about poor behavior. Two love interests, self-involvement, bad behavior (she keys his car- huh? a grown woman who professes to be the arbiter of good behavior?).

Ooops. Another one for which I am the lone dissenting voice. After checking the Amazon reviews, it appears I would be the only one to give the book less than 4 or 5 stars. I might have given it 2.

I had actually read the previous book about these characters, but didn't realize it when the ARC arrived. I really enjoyed this one, and didn't go back and re-read my review of the previous novel Love Walked In until I had finished Belong to Me.

Probably a good thing, because although I had liked parts of the first one, my overall impression of Love Walked In was "simply Chiclit."

De los Santos' latest effort, however, is much more. Certainly, it will appeal more to women than to men, but the narrative and the characters have grown and developed; they have blossomed into something much more complex than the original.

Here is a link to my 2006 review of Love Walked In. I still love the poem I found by de los Santos (Milagros Mourns the Queen of Scat) and included in the review.

Thanks to Christine at Harper Collins for this one.

The Weekly Geeks topic this week is favorite books from your childhood. I had so many books that I loved that thinking back and trying to remember all of them was an interesting experience.

There are others that were favorites when my kids were little, too, but I won't go into that. My childhood favorites are older classics, and yet, I think they hold up and have appeal today.

Received a bunch more ARC's in yesterday's mail. This is a great thing because next week we will be leaving for Florida, and I'll be fully prepared with books for the trip.
Posted by jenclair at 7:46 AM 6 comments:

Yet his relationship with Anne Boleyn still fascinates. Actually, this novel is ostensibly about Frances Pierce, who becomes one of Anne's ladies and remains with her until the execution. Because of Frances' position in the court, her story is entangled with Anne --and with Anne's friends and enemies; so while Frances tells her story, she is also recording Anne's rise and fall.

For those unfamiliar with some of the political dynamics of this historical event, there is much information interwoven with Frances' story, but the novel lacks narrative weight and the characterization isn't as strong as it could be. My favorite novel about Anne is still Brief Gaudy Hour.

OK, now that my computer is working again, I've missed Week 2 of Weekly Geeks. I do think it is a great idea and am going to try to catch up a little. Yes, I know that Week 3 is already posted, but "I'll think about that tomorrow" -- to quote Miss Scarlett.

I've gone back and edited my posts on The Girl With No Shadow, Mystic and Rider, A Flaw in the Blood, and The Thirteenth Tale to add links to other reviews.


I've a couple more books to review, but here is a picture of the first of the Queen Ann's Lace to bloom. I love them. 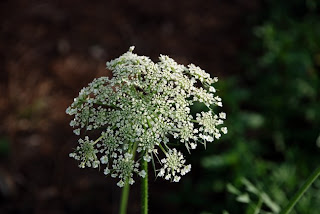 The Forgery of Venus


Gruber, Michael. The Forgery of Venus.


An ARC from Lauren, this unusual book is gripping and takes the reader on so many twists and turns that it is almost impossible to describe the plot. Chaz Wilmot, a talented artist, has difficulty selling his best work, not because people aren't willing to buy, but for some tangled personal reasons relating to a difficult relationship with his father. He makes his living in commercial art, just getting by, rather than putting his best work in galleries.

Several events converge at once, and Chaz finds himself in Europe, confronted with the possibility of a huge windfall if he is willing to forge a Velázquez. Before leaving the U.S., Chaz had participated in a drug study during which he had hallucinations of "being" Velázquez, and the combination of the residual effects of the study and the possibility of earning enough money to provide treatment for his sick son help persuade Chaz to try.

I'm not sure how to classify this one - mystery, alternate history, time travel, a study of madness, psychological thriller... a little bit of everything thrown in here. Doesn't matter, I suppose; I found it fascinating, well-written, informative, and highly entertaining.

(It took me a day or so after finishing the book to write this review, and I'm only just now getting it posted because of computer difficulties. I thought maybe I could come up with a more concise version of the plot, but no such luck. The plot is complicated and fascinating.)

My Own Little Reading Room - a girl after my own heart, she reads across the spectrum.

Educating Petunia - I've already spotted one of my favorite Shakespearian comedies and an Edith Wharton review.

This Red Head Reads - Well, I love red heads and have a lovely daughter with red hair (even if it has been coaxed along somewhat).

The Axe for the Frozen Sea - Interesting blog titles attract me, and from a Kafka quote, even!

Foreign Circus Library - Saw a couple of titles there that I'd like to read-- always a good recommendation.