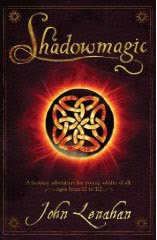 Lenahan, John. Shadowmagic. A fantasy geared to the YA audience, this ARC was a fun little read.

Lenahan is a magician who was "the first person in 85 years to be expelled from the Magic Circle for explaining the Three-card Monte on television." Evidently, that only spurred him on to other adventures, including his own series on the BBC and this fantasy novel for young adults.

Told in the first person by Conor, who believes he is an average teenager (although he realizes that his father, a university professor, is a bit eccentric), the story is full of humor and adventure.

When Conor and his father are kidnapped and transported to the land of Tir Na Nog, specifically to a dungeon where they find themselves chained to the wall, Conor's normal teenage worries take on a decidedly more serious slant and survival becomes a more immediate concern.

In Tir Na Nog, Conor finds out that his father is much more than he seemed and that things that he thought were myth are very real. He encounters various kinds of magic and meets banshees, imps, and a lovely, if unpredictable, princess.

A book full of wry humor and adolescent hubris, Shadowmagic is a fantasy adventure of family, friendship, and courage. I thoroughly enjoyed this short fantasy escape.

You can also listen to the free podiobook, read by Lenahan.