Believing the Lie by Elizabeth George 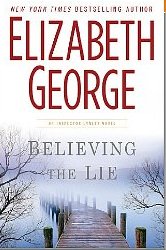 Believing the Lie is an Inspector Lynley mystery.  Although George's books are long, they read very quickly.  Unfortunately, I have not enjoyed the series as much since she killed off Helen.

Description from Amazon:  Inspector Thomas Lynley is mystified when he's sent undercover to investigate the death of Ian Cresswell at the request of the man's uncle, the wealthy and influential Bernard Fairclough. The death has been ruled an accidental drowning, and nothing on the surface indicates otherwise. But when Lynley enlists the help of his friends Simon and Deborah St. James, the trio's digging soon reveals that the Fairclough clan is awash in secrets, lies, and motives.


What I like:  the book reads very quickly and does keep my attention.  I like Barbara Havers and Winton (although Winton is not really a part of this one).  As a side note, Barbara mentions Lynley's Lobb shoes.  I looked Googled it, and Lobb's boots and shoes are quite expensive  -- check the price list.   Got several grand to spare, get a pair of Lobb's boots.


1)  Simon and Deborah St. James have, in the last several books, become more and more  annoying.   The plot line about their inability to have a child is supposed to support the main plot line, but is irritating.  Deborah's behavior is idiotic.


2) The reporter for the scandal sheet and his "girl friend" -- silly.  Their phone conversations are too silly to discuss.   Not a bad idea, but ultimately, a failure.


3) Lynley's attraction to Isabelle.  Didn't like it much in the previous book, either, but at least it is resolved in this one.


4) The story line with Tim, Ian's young and troubled son--he was an interesting character until it just got out of hand.   Troubled is one thing, where George carries it, quite another.
------
Remember these are just my personal opinions.  I used to love this series, but ...