The Revenge of Moriarty by John Gardner 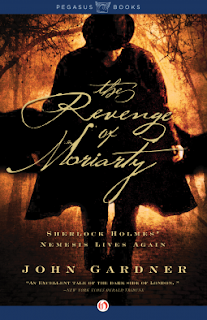 The Revenge of Moriarty (a republication of Gardner's 1981 novel, back in print after 40 years) this offering from Net Galley was a genuine pleasure.  I love Gardner's Grendel, the Beowulf myth from Grendel's pov, and always used it when I taught Beowulf.

Years ago, I read The Return of Moriarty by Gardner, but it has been so long that all I can remember are Inspector Crow and his wife (aside from Moriarty and Sherlock Holmes).  I will have to seek this one out again as it precedes The Revenge.

If you are a fan of the Sherlock Holmes stories (and/or of all of the succeeding pastiche versions by modern authors), you will find The Revenge of Moriarty a joy.

In this novel, we have Moriarty's version of his relationship with Holmes and of his criminal enterprises.  The villain gains depth as Gardner presents his side of events and his planned revenge, but Gardner never permits Moriarty to become a sympathetic character.

:)   Drawn from Moriarty's coded journals, much of the narrative presents the cunning plans of the arch-nemesis of Sherlock Holmes.  Gardner also includes information gained from descendants of one of Moriarty's henchman and from one of Inspector Crow's descendants.  The tongue-in-cheek introduction by Gardner makes the source of the materials clear.

Altogether a fascinating narrative that makes great use of what Holmes (or Watson) has said about Professor Moriarty, and when the accounts differ, there is an explanation.

Highly  recommended for fans of Sherlock!