Some of the ARCs that have arrived in the mail in the last several weeks. 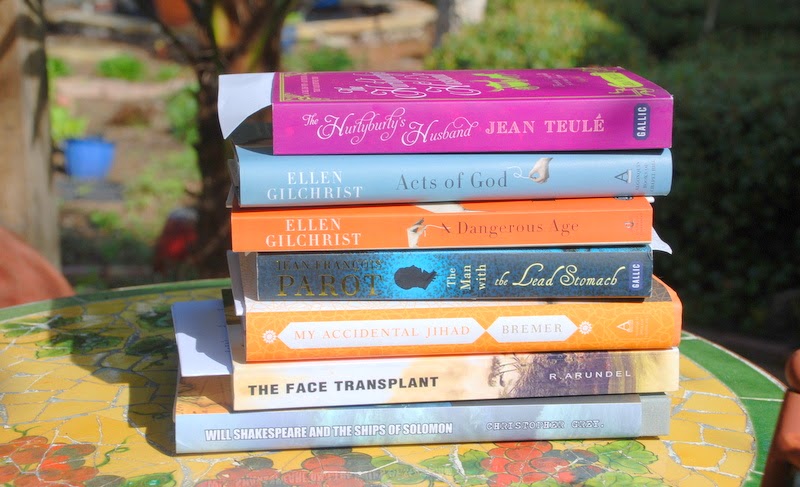 The Hurlburly's Husband by Jean Teule (trans. by Alison Anderson) is described as "'Bawdy romp one minute, a gruesome tragedy the next. The writing is beautiful, witty, grisly and moving.' Sunday Telegraph 'If you liked The Other Boleyn Girl then this book is certainly one to adore.' "
From Gallic Books.

Acts of God by Ellen Gilchrist: "In Acts of God, master short story writer Ellen Gilchrist has crafted a collection that takes us into eleven scenarios in which people dealing with forces beyond their control somehow manage to survive, persevere, and even triumph."

A Dangerous Age by Gilchrist:  "A Dangerous Age tells the story of the women of the Hand family, three cousins in a Southern dynasty rich with history and tradition who are no strangers to either controversy or sadness. By turns humorous and heartbreaking, the novel is a celebration of the strength of these women, and of others like them. In her characteristically clear and direct prose, with its wry, no-nonsense approach to the world and the people who inhabit it, Gilchrist gives voice to women on a collision course with a distant war that, in truth, is never more than a breath away."
From Algonquin Books.

My friend Suzie is a devoted reader of Gilchrist, so these will probably go to New Orleans when I finish with them.

The Man with the Lead Stomach by Jean Francois Parot: This is the second volume of the Nicolas Le Floch Investigations.
From Gallic Books.

I read the first book in the series last year and found the writing a bit stilted, but this book has a different translator, so I'm eager to see if there is any difference in style.

My Accidental Jihad by Krista Bremer:  "A moving, lyrical memoir about how an American essayist fell in love with a Libyan-born Muslim man and learned to embrace the life she made with him."  From Algonquin Books.

I tried the last two (The Face Transplant and Will Shakespeare and the Ships of Solomon) when they arrived and both can be cast aside after only a few pages.
Posted by jenclair at 5:30 AM

Labels: in the mail