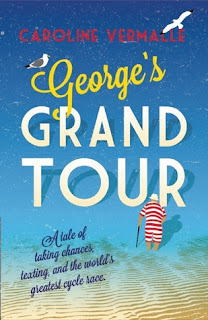 George's Grand Tour by Caroline Vermalle (trans. by Anna Aitken) is a delightful and heartwarming little gem of a novel.  An ARC that arrived in the mail, Georges's Grand Tour turned out to be one of those books that I will long remember for its touching account of what actually makes up the fullness of life.

George Nicoleau is 83, widowed, and subject to some health issues, but he and his slightly younger neighbor Charles have planned an exciting journey, driving (not cycling) the route of the Tour de France.  The two have dreamed and planned for months, but just when they are about to set off complications arise when George's granddaughter Adele calls, saying that her mother (George's over-protective daughter, who is incommunicado in Peru) has insisted she check on George frequently.

Since George will not be home, this unlooked for complication could derail the trip.  The problem is resolved with the help of Charles' son-in-law. The calls are diverted from the landline to a cell phone much to the astonishment of both George and Charles, and the two take off as planned.

For both men, this is a trip of a lifetime for many reasons. Neither of them have traveled much, both are elderly, and neither have much familiarity with technology.  George must learn to text in order to communicate with Adele, and his experience in learning "the language" is both funny and endearing.  His fear and frustration echo the same feelings that older people (including myself) often feel when confronted with new technology, but when he finally "gets" it, George is captivated with his new form of communication.

A gentle story that deals with aging, relationships, and the willingness to take risks regardless of one's age, George's Grand Tour is itself a tour de force-- in a very tender and refreshing way.  Vermalle's characters are charming and genuine, and her obvious delight in George and his grand tour is half the fun.

Winner of the Prix Nouveau Talent and The Prix Chronos

My thanks to Meryl Zegarek and Rachel Hundert for this lovely little book.