The Professor by Robert Bailey 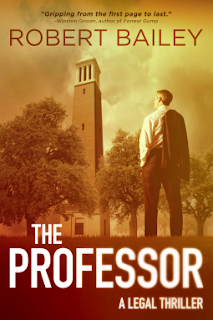 A  debut novel, The Professor makes the most of atmosphere and Southern location.

After a long and illustrious career as a law professor at the University of Alabama, Tom McMurtrie finds himself forced from his position.  Angry and betrayed, McMurtrie is also dealing with serious health issues, apathy, and a little self-pity.

An old friend asks for his help when her daughter, son-in-law, and granddaughter are all killed in a terrible collision.  McMurtrie hands the case over to Rick Draper, a former student who has a grudge against McMurtrie.

McMurtrie has been a professor for years, not a trial lawyer.  He gives Draper the case because, as a local, he will have some built-in advantages.  But Draper is a new lawyer, a rookie, still trying to get established and without the experience of an old hand.  As the investigation begins to reveal implications of arson, destruction of evidence, blackmail, and murder, Draper realizes he may be in over his head.

I liked the overall Southern atmosphere of this novel and Bailey's writing style.  The premise is both interesting and thought-provoking.  How far will a company go to make a profit? How far will the owner of a trucking company go to get the verdict he wants?  The good guys have both strengths and weaknesses.  The villains, however, are one-dimensional, containing no sense of humanity.

I liked the mention of Bear Bryant; referencing that iconic figure does create a nostalgically favorable impression, but it is easy to lose the positive emotional atmosphere his name evokes if the reference is overused.  Coach Bryant's name still carries such affectionate weight, but a more judicious use would have suited me better.

The violence is excessive and gratuitous, especially concerning the truck driver's widow, and feels at odds with other elements of the novel.  The novel would have been better if the villains had a little depth and the violence (physical, emotional, sexual) had been more restrained.
The Professor is Bailey's first novel, and I liked it a lot, in spite of my nitpicking.