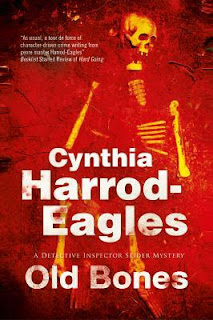 This is my first Bill Slider police procedural, and I just realized there are many more to enjoy.

It was a nice surprise to discover how much I liked the book since I was not much impressed with the cover.

Old Bones is about the discovery of a skeleton in a garden. Bill Slider's boss thinks an obviously cold case will keep his detective out of trouble since Slider's previous investigation of an underage sex ring involving upper echelons in the police hierarchy has put him under a cloud.

The case does get under Slider's skin.  The skeleton of a fourteen-year-old girl who went missing two decades previously will be difficult--memories of the day Amanda Knight disappeared are twenty years old, files are missing, and possible suspects are dead or have moved away, but Slider's team will give it every effort.

Old Bones is an excellent police procedural with good characterization and an intriguing plot.  That alone would have been enough, but what raises the bar even further is Harrod-Eagles writing.  She skillfully maneuvers all elements of the story--the characters, plot, and pacing.

And then there are the occasional lines that brought a little humor, an allusion, or a neat comparison:

"That's what I like about you, Maurice," Swilley said sweetly.  "Always ready to go the extra meal."

All in all, a book to be enjoyed on many levels, but first and foremost the competence of the author in presenting a serious and intriguing cold case police procedural.