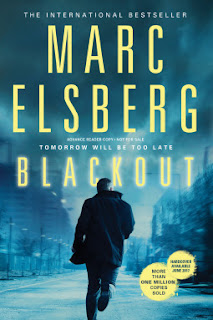 As a novel Blackout has problems (moves from one city to another with minor characters who may or may not appear more than once), but as a prediction of what might happen if the electric grid failed across most of Western Europe--as a detailed conjecture of the domino effect on the infrastructure--Marc Elsberg has created a frightening scenario of how society might fall apart if the lights go out.

I've read other books about the immediate and long-term effects that would result with the loss of the electric grid; our current concept of life could so easily be completely altered by an EMP, an intense solar super storm,   or a cyber attack on the electric grid.  Everything from communication, to transportation, to the food supply, to sanitation, to medical services--depend directly or indirectly on electricity.

Blackout begins with an auto accident in Italy when a blackout cuts all traffic lights.  The main character Pietro Manzano is injured, but in comparison to at least one other victim of the accident, Pietro injuries are minor.  At the time, everyone believes the blackout is temporary, a huge inconvenience, but temporary--at worst, a day or so.

Before long, however, disturbing news begins to flow in (while communication is still possible)--Italy is not the only country to experience the loss of electricity, all of Western Europe is under attack.   The source and purpose of the attack may not be clear, but unless something can be done to halt the damage, the end result can be hypothesized.  Countries from Norway to Spain scramble to get their grids back online before it is too late.

Hospitals are almost immediately overrun with accident victims, surgeries and treatments are suspended or carried out under primitive conditions as generators fail from lack of fuel; food supplies that need to be kept cooled spoil rapidly; large dairy farms that depend on automatic milking systems see animals die in pain from infections in their udders; pumps don't work at gas stations--problems and connections multiply and expand.

Perhaps most frightening is the inability to keep nuclear fuel rods cooled.  One failure of a nuclear plant is dreadful, but how many nuclear plants are there in Europe where the novel takes place?

Yikes!  Glad this was a novel!


In 2015, I read Ted Koppel's nonfiction Lights Out which looks at some of the consequences of a failure in the electric grid in the U.S.  It was a fascinating, informative book, but pretty discouraging.  The world's dependence on electricity is so thoroughly embedded that a large scale failure of the grid would be devastating.

Meandering on--why do so many of us love post-apocalyptic (from a named or unnamed event) and dystopian novels?  Even zombie novels reflect our fear of a catastrophe that wipes out most of civilization and of man's determination to destroy himself one way or another--through war or environmental damage or political/religious fundamentalism.

Back on point.  Blackout was published in Germany in 2012 and the translation is now making the rounds in the U.S.  While I thought the novel could have been better, Elberg's vision of the chain reactions that would result in the event of an electric grid failure of even short duration will make you realize how fragile our civilization is.  And I think that was his point.

Read in April.  Review scheduled for May.