Merlin at War by Mark Ellis 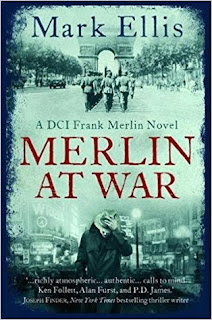 Mark Ellis' Merlin at War, featuring London DCI Frank Merlin, is the third in this series.  In 2014, I read and enjoyed The Princes Gate, set during the phony war between September 1939 and May 1940, but I somehow missed Stalin's Gold, the second in the series which also received positive reviews.

Merlin at War takes place after the fall of France; the armistice between Vichy France and Germany is in effect, and the nominal government of France collaborates with Nazi Germany in reprehensible ways.

The book begins, however, in Crete where a team of British soldiers hope to escape and be evacuated. Only one man survives the perilous journey.  The survivor carries a letter from his superior officer, but the officer dies before he can definitively designate the letter's recipient.

Ellis depicts a London during the nervous calm after the autumn Blitz of 1940:  a young woman dies in a botched abortion; the French emigre doctor who performed the abortion is murdered;  a traitor among the Free French delegation operating from London sends messages to the Vichy government with the time and place a young agent is to be dropped into France; there are a connections to Buenos Aires and New York.

Most of the book is a satisfying mystery with compelling historical elements, but the multiple subplots slow it down a bit. Nevertheless, Merlin at War presents a view of the war from many angles, and Ellis' main characters have depth and dimension.