The Collector by Fiona Cummins and Snakehead by Peter May 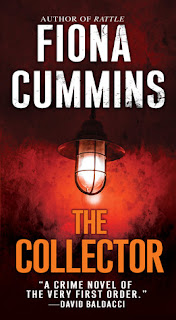 The Collector by Fiona Cummins continues the story of the "Bone Collector" introduced in a previous novel which I haven't read.  Brian Howley (the Night Man/Mr. Silver/the Collector) is a serial killer, and not just a serial killer, but one who collects physical anomalies.

Ok.  Evil serial killer thinks he has found an apprentice and an heir who will help him recapture the six-year-old boy who got away and who will appreciate his murders and fetish-like collection of oddities.

Young Saul Anguish (how's that for a name?) is an intriguing character, but it seems far-fetched to believe Howley could target a teenager and groom him as an apprentice in such a short time.
Saul has enough emotional and personal problems to make the corruption possible, but he does have a sense of right and wrong despite the complications in his life--and to pervert him completely in two or three days created a problem for me.  Brian Howley's father had years to make his son, a captive audience, into a serial killer, so expecting a teenager to be converted overnight is a bit much to ask.

Strangely, the detective Etta Fizgerald, the protagonist of the first book, has a relatively small presence.  She's important, but she doesn't have that much time in the plot. The children, Jakey and Clara, are sympathetically rendered.

The book had a lot of possibilities to be something more, but makes the bizarre and gruesome the main interest.  (I just looked at the reviews on Goodreads, and they are all very positive.  However, I'm not a fan of making grisly and macabre the basis of a plot.) 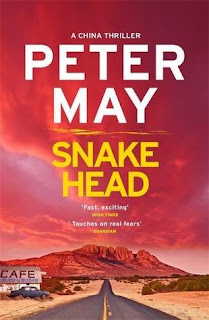 Snakehead by Peter May is the 4th book in his China series.  Having enjoyed The Lewis Trilogy set in Scotland on the Isle of Lewis, I was expecting to like this more than I actually did.

Description:  The macabre discovery of a truck full of dead Chinese in southern Texas brings together again the American pathologist Margaret Campbell with Li Yan, the Beijing detective with whom she once shared a turbulent personal and professional relationship. Forced back into an uneasy partnership, they set out to identify the Snakehead who is behind the 100-million-dollar trade in illegal Chinese immigrants which led to the tragedy in Texas - only to discover that the victims were also unwitting carriers of a deadly cargo. Li and Margaret have a biological time-bomb of unimaginable proportions on their hands, and an indiscriminate killer who threatens the future of humankind.

I found the main characters a bit difficult to care about, not that I disliked them, I just wasn't really taken with them.  The basic idea of the plot is a good one, but the way the virus was to be triggered was weird.  Human trafficking is despicable, and obviously there is much more of it than I was aware of for most of my life; however, the fact that Li arrives from China to find the case involves his sister who has been trafficked for the sex trade is quite the coincidence.