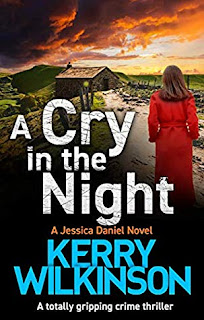 I've enjoyed this series for quite a while, but admit this one isn't my favorite.  A Cry in the Night lets you know pretty early that something is wrong on Jessica Daniel's team.  You know how when a character you like does something untoward, it can be either easily accepted or cause uneasiness?  Jessica offers 10 pounds to a snitch to let her know when her suspect turns up, and 10 more when he does.  Why did that make me so uneasy?  Because Wilkinson intends exactly that--to create a sense of disquietude.

From description:  "Samuel is fourteen years old. He lives with his mother in a Manchester flat, goes to school, plays on his computer, reads books and likes the same things that most other teenagers do.
He’s also blind.
And he’s the only witness when his mother is attacked in their own home late one night."

The plot was interesting.  A while back I read a couple of books by Andreas Pfluger in which his main character is blind and uses echolocation.  Fourteen-year-old Samuel also uses echolocation and is able to tell the police that there were two assailants, one taller than theother,  and that one moved with a limp.  He also is able to "recognize" people by the same method, which startles Jessica.  She is both impressed and disbelieving and investigates this phenomenon to see how much trust to put into Samuel's abilities.

A second plot thread is both connected and separate.  The underlying awkward tension, however, has to do with a threat to Jessica, not a physical one, but a threat nonetheless.

The conclusion leads to a continuing arc for the next book.  The cases are solved, but the apprehension about Jessica's situation will most likely be the main narrative structure for the next novel.  I really don't like worrying about my favorite characters.  :/ 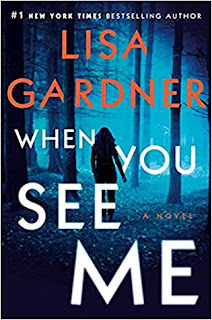 Lisa Gardner's When You See Me brings together three capable women.

from description:  FBI Special Agent Kimberly Quincy and Sergeant Detective D. D. Warren have built a task force to follow the digital bread crumbs left behind by deceased serial kidnapper Jacob Ness. When a disturbing piece of evidence is discovered in the hills of Georgia, they bring Flora Dane and true-crime savant Keith Edgar to a small town where something seems to be deeply wrong. What at first looks like a Gothic eeriness soon hardens into something much more sinister...and they discover that for all the evil Jacob committed while alive, his worst secret is still to be revealed. Quincy and DD must summon their considerable skills and experience to crack the most disturbing case of their careers—and Flora must face her own past directly in the hope of saving others.

Although I enjoyed the D.D. Warren series before Flora Dane was added, Flora Dane has added an edge to the plots.  D.D. and Flora provide a study in contrast: D.D. a dedicated law enforcement officer provides a balance to Flora's vigilante approach.  The two women have gradually come to work well together despite their differences.  I'm also glad to see Keith Edgar, the true crime and computer expert introduced in the previous book, join this investigation.  By creating new intriguing characters and including them in new books, Gardner keeps fresh possibilities for plot lines.

---
I've been busy with stitching on my panels for 25 Million Stitches.  I finished the first one and mailed it, and I'm making progress on the second panel. 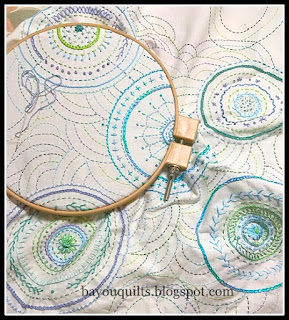 I've binge watched the Father Brown series (based on G.K. Chesterton's short stories) while stitching.  I've especially enjoyed the clothing and cars from the 1950's--the hats are a treasure.  If you enjoy cozy mysteries, try this series set in the picturesque village of Kembleford, where an unprecedented number of murders occur!