A Choir of Crows by Candace Robb 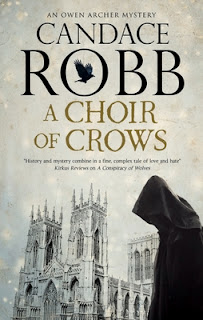 Candace Robb's medieval mysteries featuring Owen Archer and his wife Lucy has been one of my favorite historical mystery series since I read the first one, The Apothecary Rose.

The books contain two of my interests--history and mystery--in well-written and suspenseful narratives.  The characters have the timeless problems of relationships with others (family, friends, society) and the problems of their specific historical era.  Robb's impeccable research and insight into human strengths and weaknesses combine to make each book a living history.

A Choir of Crows is something of a transitional novel.  John Thoresby, Archbishop of York has died.  A new political set of alliances is set in motion when a Neville is selected to be the next Archbishop.

Owen Archer owes allegiance to Prince Edward and, along with everyone else in York, is unsure of the changes that a new Archbishop will bring.

Alexander Neville is to be enthroned as Archbishop in December of 1374, and York anticipates the arrival of the powerful families who will be present for the event.  Uncertainty prevails, as always, when major changes involving influential political and ecclesiastical loyalties are in flux.  With both the king and the prince in ill health, all sorts of intrigue and political schemes are in play.

Two bodies are found on the grounds of the York Minster, and Owen is called in to investigate.  Then a third.  There is also a young woman who, disguised as a boy, has been singing with a group of traveling minstrels and is in danger.

An interesting angle has to do with Ambrose, a character who appeared early in the series and who has returned with information that Prince Edward has been a victim of French doctors who have been slowly poisoning him.  (History has recorded Edward of having dysentery, but the author has another theory which she explains in the author's notes.  Further reading and sources are also listed.)

Although always happy to return to Owen, Lucy, and York, this is not my favorite in the series.  There are several plot threads involved that overlap and separate throughout.  What A Choir of Crows does is give the reader a needed visit with the characters and set the scene for the following books with the promise of more political upheaval.

If you are interested in medieval mysteries, begin with The Apothecary Rose which introduces the main characters and allows you to follow them as they develop throughout the series.  You won't regret it. 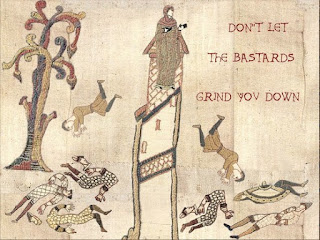