Another attempt to catch up on reviews. 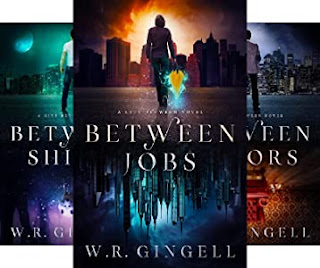 Ashley mentioned the Between books by W.R. Gingell a while back.  I knew I'd really liked Wolfskin by Gingell (Intisar Khanani recommended Gingell's books) and had also enjoyed Masque.  So I thought I'd give the Between series a chance.

How embarrassing.  I'd already read the first two and didn't realize it until I started reading Between Jobs, book 1, but the first page brought much of it back...well, certain scenes and the characters back, there was much I didn't remember.  I raced through it again and went for Between Shifts, book 2, which I'd also read.

I moved on to books 3, 4, 5, 6, and 7!  Book 3 (Between Floors) was even better, and I couldn't stop!  They were all free from Kindle Unlimited, and they carried me through December.  Briefly:  a teenage human's house is taken over by 2 Fae and a Vampire (investigators).  Murder mysteries in an Urban Fantasy.  If you enjoy Urban Fantasy, this may be for you, too! 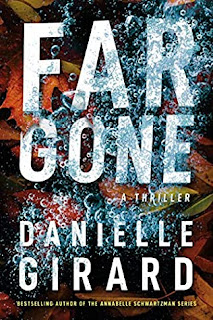 Far Gone is the second book in the series, and I haven't read the first book.  Maybe that would have helped, but it still worked fine as a stand alone.
from description:

When a North Dakota couple is shot down in their home in cold blood, the sleepy town of Hagen wakes with a jolt. After all, it’s usually such a peaceful place. But Detective Kylie Milliard knows better.Despite not handling a homicide investigation in years, Kylie is on the case. A drop of blood found at the scene at first blush promises to be her best evidence. But it ultimately only proves that someone else witnessed the murder—and the results are shocking: the DNA reveals a familial match to a crime involving local nurse Lily Baker from over a decade ago. This unveiling stirs new nightmares for Lily as she’s forced to reckon with the most traumatic time in her life.

I'd give this one a 3/5.  Maybe if I'd read the first book, I'd have been more invested in the characters. 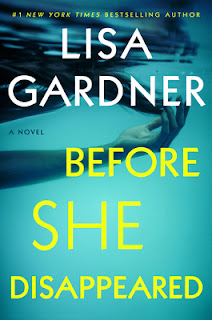 I love Gardner's D.D. Warren series, but I'm not sure about this one.

from description:  Frankie Elkin is an average middle-aged woman, a recovering alcoholic with more regrets than belongings. But she spends her life doing what no one else will--searching for missing people the world has stopped looking for. When the police have given up, when the public no longer remembers, when the media has never paid attention, Frankie starts looking.

Frankie is an unusual character and the plot was interesting. However, if the book had not beenwritten by Lisa Gardner, I don't know that I'd be interested in the next book.
Since it is Lisa Gardner, I will give the next book a chance, but what I'd really like is more of D.D. Warren and Flora Dane.
NetGalley/Penguin Group
Mystery/Missing Persons.  Jan. 19, 2021.  Print length:  400 pages. 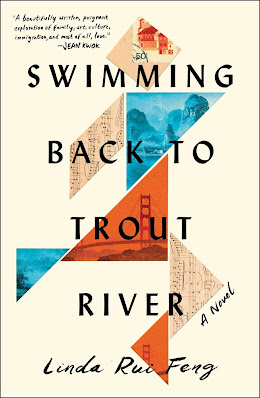 Just a mention and recommendation:
Swimming Back to Trout River by Linda Rui Feng.  I'll review this one later because it is a remarkable book!  It is one of my favorites of this year, beautifully written, deeply touching.

From description:  A lyrical novel set against the backdrop of China’s Cultural Revolution that follows a father’s quest to reunite his family before his precocious daughter’s momentous birthday, which Garth Greenwell calls “one of the most beautiful debuts I’ve read in years.”

I've read Balzac and the Little Chinese Seamstress and Wild Swans:  Three Daughters of China and maybe a couple of others about the Cultural Revolution, but those two made the most impression.

Swimming Back to Trout River is an excellent and worthwhile addition for anyone interested in the Cultural Revolution (1966-1976) or interested in just reading a beautifully written book.  This is another NetGalley book and won't be published until May, so when I review it, I'll schedule the review for later.