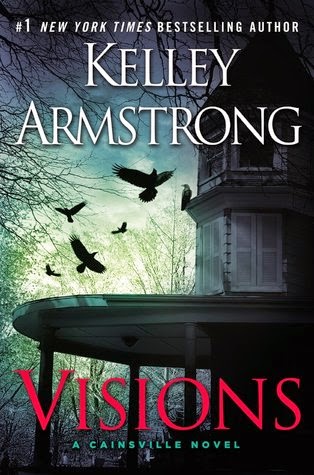 Visions  is Armstrong's second novel in her new Cainesville series.  I really liked Omens, the first novel in the series, and I was delighted to receive an ARC in the mail.

In Omens, Olivia Taylor-Jones discovers that not only was she adopted, but that her birth parents are serial killers serving prison sentences.  Kick in the gut, that.

To escape the hounding of the press, who are delighted with the story of a rich and influential family raising the child of serial killers, and to give herself time to adjust to these devastating circumstances, Olivia ends up in the small, secluded town of Cainesville.

Teaming up with Gabriel, her birth mother's lawyer, Olivia is able to prove that at least one set of the murders for which her parents were convicted was committed by someone else.

In Visions, Olivia and Gabriel bicker and makeup (they aren't entangled romantically--yet), and the two of them continue their investigations which take several unexpected turns.

What have we here:  Some paranormal activity, some CIA mind experiments, some Welsh mythology, and some confusion about who the bad guys really are.

For the most part the novel is fast-paced and engrossing, but there were a couple of things that bothered me.  One is Olivia's relationship with Ricky, a 22-year-old college student, biker, and gang member.  I find the dichotomy of such a nice, mature, intelligent character and prospective gang leader (with all of the criminal implications) a bit too fantastic too believe.  I mean if he is all of the first, how can he be OK with his role in the gang.  Nor did I find the raging hormones in any way contributed to the plot.

One more nitpicky detail:  How many times have you been reading a novel and noticed a word appearing so often that it begins to annoy you?  I started to go back and count each time the word "presume" was used in this novel.  Waaaay to many times.  In addition, sometimes "presume" worked, but sometimes the better choice would have been "assume." They are similar in meaning and can often be substituted, but...not always.

Nevertheless, I was glued to the pages as Olivia and Gabriel navigated through the secrets and mysteries they encountered and the new developments in plot lines.  I like Armstrong's writing, and I was already engaged with the main characters from the previous novel, but the first novel appealed to me more.  I do look forward to the next one, however.  I mean there are things I really need to know!

This was an ARC.  Read in July;  blog post scheduled for August.