One of those reading iteneraries...

Lotus at Lotus Reads has provided me with some excellent titles over the last year (Shadow Cities: A Billion Squatters, a New Urban World , Maximum City: Bombay Lost and Found and Palace Walk).

The latest interesting titles from current Lotus Lists include:

Actually, there are even more on the list of those that I want to read, but those three stand out at the moment.

Another that I'd like very much to read is Indian Summer: The Secret History of the End of an Empire, and follow the link to an article that gives a most interesting review of this book by Alex von Tunzleman.

This is what I did last night instead of read...worked on a WIP that has been on my design wall for several months now and watched Look to the Lady based on Margery Allingham's Campion novels. I basted the quilt sandwich together, then sat down to some hand quilting as I reveled in the atmosphere. 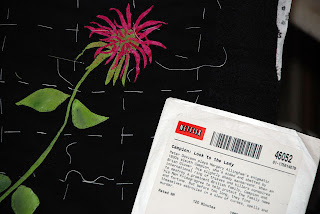 Tonight I did get a good more reading done and still love The Spanish Bow. And now to bed...
Posted by jenclair at 12:10 AM