Tallman, Shirley. The Cliff House Strangler. Still trying to get caught up on reviews. This is a Sarah Woolson mystery, the third in this series about Sarah, a 19th century female attorney struggling to establish her own firm in atmospheric San Francisco.

I've enjoyed the previous mysteries in this series, and this one didn't disappoint. Sarah's family contains such varied individuals and social views, that much can be ascertained about San Francisco during this era from the family alone. There is a definite feminist approach in Sarah's determination to become a lawyer in the 1880's and in her feisty attempts to aid her clients. 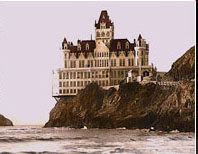 on a very dark and stormy night. Sarah and her friend Robert Campbell attend the gathering hosted by Madame Karpova, who has studied with Madame Blavatsky (real life founder of the Theosophical Society and a fascinating and controversial character, medium, clairvoyant), and are therefore present when one of the participants is murdered.

These mysteries are light and fun. I like the accumulation of characters from the first and second novels. Some make actual reappearances, some are just mentioned, but it is fun to have the sense of continuity. I didn't take part in the "cozy mystery" challenge, but think this one might fit into that category. San Francisco is a character in her own unique and slightly eccentric way.