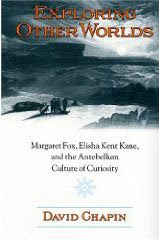 Exploring Other Worlds is a very interesting look at two celebrities from the mid-nineteenth century. Margaret Fox and Elisha Kane both achieved fame/notoriety/celebrity status before the Civil War. Maggie Fox's claim to fame was as one of the spirit-rapping Fox Sisters; Elisha Kane was a gentleman traveler, an arctic explorer, and a national hero.

According to David Chapin, "In their own ways Kane and Fox epitomized what can best be called a culture of curiosity. They both operated in a new world of commercial mass culture that appealed to curiosity about the unknown .... The culture of curiosity was reflected in the newspapers, the dime museums, the lecture halls, the books, and the pamphlets of this era." The beginning of a new mass consumer culture was developing, and it provided a new kind of audience.

While neither Fox nor Kane were actually in show business, they were both entertainment attractions, and as a result, ripe for the kind of voyeuristic celebrity we are familiar with today. Both Fox and Kane needed the publicity for financial reasons, but the celebrity was a double-edged sword for both.

Chapin takes a much more skeptical approach to the Fox Sisters than does Weisberg in her biographical work, Talking to the Dead. He entertains no notion other than that the sisters were frauds; he does, however, look at Maggie and her situation sympathetically. Although he dismisses the spirit rappings as fraudulent, Chapin sympathizes with the difficulty of working women during this time period and never dismisses Maggie, herself.

Chapin includes more primary source information about the relationship between Maggie and Kane and mentions incidents that Weisberg omits. By the same token, while Chapin mentions Horace Greeley's acquaintance with the Fox family, he does not mention, as Weisberg does, that Kate Fox lived with the Greeley family for a while.

Kane actually gets a less sympathetic account. Chapin mentions Kane's arrogance, condescension, and sense of superiority in his travels, in his relationship with Maggie and in his arctic explorations. Part of Kane's sense of superiority is directly related to the cultural and social mores of the era, but I have to wonder if it was not partially related to his small stature (which was frequently mentioned). He was about five and a half feet tall and rarely weighed more than 130 pounds.

Although courageous, curious, and adventuresome, Kane was physically fragile as a result of bad bout with rheumatic fever when he was 18. He managed to pack an enormous amount of travel and adventure into his short life.

Chapin's book gives an informative and well-documented view of these two individuals, of their relationship, and of the pre-war society to which they belonged. It reads much more like a history text than does Weisberg's Talking to the Dead, but Exploring Other Worlds is excellent historical writing, simultaneously informative and interesting. I enjoyed it; it provides a great balance to Weisberg's book.