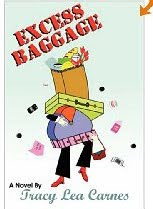 Tracy Carnes takes yoga at Lotus Studio and is a new friend and a fellow yogini. She suffered from ulcerative colitis as a young adult and had an ileostomy the day after her 30th birthday. Her novel is a blending of fiction and fact, detailing the problems experienced by those who live with ulcerative colitis and Crohn's disease.

Her fictional character, Kelly Carmichael, is a young woman without direction, who tries to please her father with little success, has managed to attend several colleges without graduating and to hold a number of jobs for brief periods. Commitment and follow-through are not part of her lexicon. The novel follows Kelly through her failures and "almost" successes as she floats through life with little responsibility.

Just when things begin to turn around for her, Kelly is faced with a string of overwhelming troubles including her father's illness and death, her own illness and operation, her relationship with her mother, and her expectations of her boyfriend.

This short book covers several issues including the difficulty of living with any of the forms of IBS (irritable bowel syndrome), conflicts between marriage and career, taking responsibility for one's own life, and relationships.

I haven't know Tracy Carnes long, but I certainly admire her ability to live her life to the fullest. She is amazingly physically active at everything from yoga to scuba diving and...the flying trapeze!