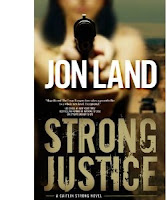 Strong Justice features fifth-generation Texas Ranger Caitlin Strong.  Caitlin is investigating the murders of young Mexican women, victims of a zealot by the name of Macerio.  When the son of her boyfriend is arrested after rescuing a kidnapped victim, Caitlin finds the case becoming dangerously personal.  There are several subplots that have interconnections.

The Texas Rangers are part of Texas fact and legend.  Originally, Stephen F. Austin employed 10 men in 1823 to "range" over a huge area and protect  new settlers to Texas.  In 1835, the Rangers were formally constituted and have earned both a reputation and a mythology for their ability to deal with Indians, bandits, smugglers, and assorted bad guys, and to restore law and order in frontier towns.

I've always had a certain fascination with the the Texas Rangers; there is definitely an aura of independence and courage in their exploits, even if their actions in earlier times often omitted standard legal procedures.  Today, the Rangers are part of the Texas Department of Public Safety and work with local sheriffs and police departments as well as the FBI and other U.S. and International crime fighting agencies.

This book, however, is more like the pulp fiction that helped build the Rangers' reputation in the 1800's than a realistic look at modern day Rangers-- which is a shame because the problems discussed are real.  Young Mexican women are sold into prostitution (AP article on the topic), corruption, drugs, and murder  have made areas along the border extremely dangerous.

Caitlin Strong is depicted as almost invincible, a kind of Wonder Woman.  There is no doubt that the author admires the Texas Rangers,  but I would have preferred a more realistic account of the very human Rangers who deal with some of the above problems.  The Mayan connection just seemed a bit silly, and Macerio's "blood border" was a too much.  Inspired, no doubt, by the real murders of women in Ciudad Jurarez since the 1990's, it bothered me that in the novel, the murderer had such an "elevated" agenda.

It is kind of funny that I adore Lee Childs' Jack Reacher, who is no more realistic than Caitlin, but still wasn't drawn to the characters in this novel.