The Typist by Michael Knight 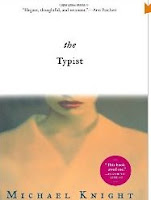 The Typist is a small novel, a quiet novel in which things are consistently underplayed.  Francis Van Cleeve (Van) is a Southern boy whose typing skills get him attached to General MacArthur's headquarters in post-war Tokyo.

From the beginning, Van emerges as an isolated young man, neither lonely, nor unfriendly, but somehow removed from much of what goes on.  He likes the  routine provided by the army, but seems to resist being drawn into relationships.

His roommate is Clifford Price, part of General MacArthur's Honor Guard.  Clifford, a decorated combat veteran, is in many ways the opposite of Van.  Van is an observer;  Clifford is gregarious, a participator, much more action oriented.  Van rarely writes his own wife (whom he married after a brief acquaintance before shipping out).  Clifford writes his mother regularly; Van types the letters for him.

Without the action of an active war, Clifford still seeks excitement, visiting the pan-pan girls and establishing a little black market trade.  When he falls in love with a native Japanese woman, he also begins his serious fall from grace as he needs money for a place for the two of them to be together.

Van, the observer, receives an invitation to the Army-Navy game at MacArthur's home, engineered by Clifford.  While he is there, Van develops an interest in the General's young son and later buys him an inexpensive, but thoughtful birthday gift.  As a result, Van is more or less roped into a baby-sitting gig that at first embarrasses him, but that eventually helps him develop a genuine sense of empathy.

Before his friendship with a lonely eight-year-old boy, Van has managed to hold himself removed from his life.  In a way, his friendship with the lonely child is what begins to pull Van away from being a passive observer and forces him to face some complicated situations.

When events occur that disrupt his peaceful existence, Van begins a journey to becoming fully human--not just decent in a learned manner, but willing to look a little deeper, to use his heart as well as his head.

I liked this short novel that has little overt action, but that examines several relationships in a distant but honest manner as Van recounts his story.  Individuals and situations evolve in a slow and rather deliberate way in this reminiscence of events that changed the life of Francis Van Cleeve.