Dragon Keeper by Robin Hobb (Once Upon a Time Challenge) 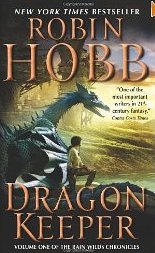 I had planned to read Dragon Keeper by Robin Hobb with Kailana, but last week, I couldn't resist beginning the series.  I'd finished Cryptonomicon, River Secrets, and A Rising Thunder and wanted to immerse myself in some dragon lore.

Years ago, I read Hobb's Liveship Traders trilogy and fell in love with Robin Hobb's (Megan Lindholm) fantasy.  I went on to read The Farseer trilogy and then The Tawney Man trilogy.    Eagerly awaiting each new installment.

Later, Hobb developed two more series that didn't engage me much, and there was a long drought without her fantasy.   I was more than eagerly awaiting this series.

Because!  This is not a trilogy!  In a few days, I'd gone through Dragon Keeper, and Dragon Haven, and was more than half-way through City of Dragons when I realized that there was no way Hobb could conclude this story line in what was left of the book.  Groan.  I thought I could get the whole kabob in one go...but no.  I'll have to wait.

Back to Dragon Keeper.  At the end of the Liveship trilogy, the dragon Tintaglia was leading the sea serpents up the Rain Wild River, to their hatching ground.  When they arrived, the serpents used the mud of the Rain Wild to form cases, a kind of mud chrysalis, from which they would eventually emerge as dragons.

When the time for their emergence arrived, everyone was eager to see the return of dragons to their world.  The length of time the prospective dragons had spent as sea serpents, among other factors, unfortunately had terrible consequences, and the young dragons that broke free of their shells were deformed and puny things that were unable to fly or to feed themselves.

The Rain Wilders fed the young dragons poorly and treated them as useless things for five years.  Feeding the dragons became more and more difficult, and they began to fear the dragons would not be content to satisfy their hunger with the handouts provided.  The dream of dragons returning to the world had become a nightmare.

A dragon conspiracy led by a golden dragon with more memories from the past deceives the Rain Wilders into thinking that it is their idea to send the dragons (along with dragon keepers) on a journey to the fabled Elderling city of Kelsingra.

------
I enjoyed the book and rushed headlong into Dragon Haven and then to City of Dragons, but I have to say that none of the Rain Wild books have the same quality of characters and narrative pace that the other series set in this world have.

It is a good fantasy series, but not on a par with the Liveship Traders or Farseer trilogies.

Labels: fantasy, once upon a time challenge