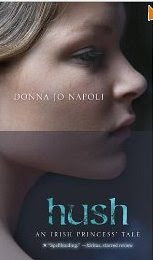 I thought Hush would fit into the Once Upon a Time challenge, but it doesn't really, although the inspiration for Napoli's YA novel has its source in the Icelandic Saga of the People of Laxardal.

Using the names and the general circumstances of Melkorka's fate as recorded in the saga, Napoli embellishes the tale of the Irish princess taken by slave traders and purchased by an Icelandic chieftain, Hoskuld.  After her capture, Melkorka refuses to speak and is considered a mute, but when her child is two years old, Hoskuld hears her speaking Gaelic to her son.  Those are pretty much the bare facts from the saga, and Napoli uses her imagination to spin a created history around Melkorka's life.

Napoli has done an excellent job of using historical facts from the early 900's to add details to her version of Melkorka's history and creating the world in which Melkorka would have lived-- including the plants that produced the dyes for clothing, social and religious details of the time, fear of Viking raids, etc.

However, while Hush does create an interesting and historically accurate picture of Ireland in the early 10th century, most of the book is set on the slave ship or on Hoskuld's ship and feels rather placid, especially given the circumstances. The story line never offers much excitement or suspense.

I enjoyed the book; it was interesting, and yet the pace is slow--not necessarily a bad thing, but there are few surprises and little suspense.