After hearing Paolo Bacigalupi's Comic Con interview on NPR, I ordered two of his books:  Ship Breaker and The Windup Girl. 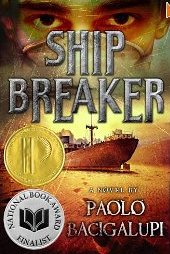 I read Ship Breaker first and enjoyed it; however, I'm not sure it rates as a novel, even a YA novel--more like a long short story or novella.  It was interesting to see some possibilities of a post-apocalyptic world, but the story gives no hint of how this "new" world developed.  Yes, the seas rose, but that doesn't give ample explanation for the situation.

Brief synopsis:  Nailer is an adolescent boy who works for a crew that scavenges oil tankers.  (These tankers have been abandoned after whatever apocalyptic event occurred.)  Live is harsh and basic, the strong prey on the weak, survival is paramount for most individuals.

When Nailer discovers a wrecked clipper ship driven on shore by a powerful hurricane, he thinks he has made a Lucky Strike that will provide the means for him survive and to escape his drunken, abusive father.  What he finds, in addition to the dead crew, is a young girl who has survived.  The girl presents a dilemma for Nailer:  if he lets her die, his chances of making the most of his Lucky Strike are much greater -- if he rescues her, he may lose any chance of a better life.

Although I enjoyed the action, the world Bacigalupi builds seems like a facade.  You know, the kind of Western town in movies that has all the fronts of the buildings and nothing behind them.  The scavenging makes sense in Nailer's world, but the tremendous contrast between the "Corporate" world and the poverty and lawlessness of Nailer's environment is never explained or examined. 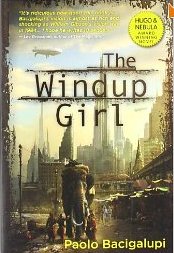 The Windup Girl, on the other hand, is definitely not a YA book.  Despite the novel's having won both the Nebula Award and the Hugo Award for best 2010 novel, I can find little to recommend it...unless you enjoy violence and degradation.

Another dystopian novel, this one takes place in Thailand after the whatever apocalyptic event has taken place.  While both Bacigalupi's world building and prose are widely praised, I didn't find either satisfying.  The characters are thin stereotypes and none of them are really likable.  It is a disturbing story and often very slow; sections feel padded with sentences and paragraphs that fail to add anything new or important.  The dialogue is stilted and the psuedo-science of kink springs, etc. failed to make sense to me.

I admire Bacigalupi's attempts (in both novels) to point out some of the dangerous policies of societies and governments, some of the threats and consequences of climate change, and some of the scary practices of big agriculture.  Unfortunately, not much in The Windup Girl worked for me.  This is just my opinion--I know many people love this novel.