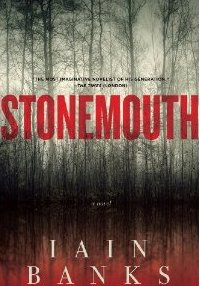 Stonemouth is the first novel I've read by Banks, and I'm having some difficulty classifying it.  The story is a first person narration by Stewart Gilmore, who has returned the small Scottish town of Stonemouth to attend a funeral after a five year absence.  From the very beginning the threatening atmosphere is palpable.

We have a long wait to find out exactly why Stewart was exiled, but as Stewart greets old friends and enemies, we learn, incrementally, that he was lucky to escape and that his return may be dangerous.  As he navigates the frequently treacherous waters of Stonemouth society, he receives mixed signals from the crime family responsible for his leaving in the first place.

Stewart also reminisces about his younger self, friends, and first love, and he realizes that at twenty-five he has a different outlook on many events and individuals.   He has to confront, face to face, some of the people involved with his disgrace and finds himself questioning certain aspects of the event that he has never let himself dwell on before.  The book is a coming of age novel with Stewart learning more about himself and about others.

The best part of the novel is the wit.  Aware of his own hubris, both now and then, Stewart can be remarkably funny, and his conversations with best friend Ferg are witty and insightful.  The repartee between Stewart and Ferg provided relief from the building tension and made me long for more of the intelligent give and take of insults between the two.  The dialogue with Ellie, his first love, has a completely different tenor, but is also beautifully done.

In spite of some of the content and language, there is a curious innocence to this novel.  I liked it very much, but find it difficult to explain why.

Net Galley e-book.  Thanks to Open Road Media for this one.