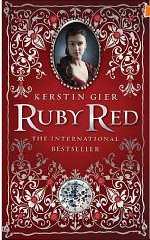 Ruby Red is the first in Kerstin Geir's trilogy, a young adult series about time travel.

Gwyneth is a likable teenager, suitably average in some ways, and yet fiercely loyal and distinctly different in others.  Gwyneth and her friend Leslie are typical teenagers, but their friendship is the kind that most people want, but aren't always lucky to have. Gwyneth's family, though, is anything but typical.

Her cousin Charlotte has been trained since infancy to join the exclusive and secretive society of time travelers because she is thought to have the inherited gene (gift or curse) that enables time travel.  Ahhh, but of course, while Charlotte has been carefully trained, and Gwyneth has not, it turns out that Gwyneth is the inheritor of said gene.  Jealous Charlotte and Unhappy Gwyneth must now re-adjust their situations.

Add a handsome fellow time traveler in Gideon, some unpleasant members of the society, a previous time-traveling young couple who decamped with one of the two Chronographs, Gwyneth's ability to see and converse with ghosts...and you have an interesting adventure in the making.  Light, but kind of fun. 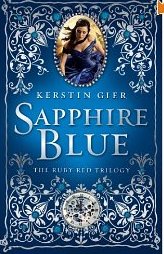 Sapphire Blue continues the time-travel adventures of Gwyneth and Gideon.  Gwyneth's relationship with Gideon is hot and cold; she finds his behavior toward her unpredictable.  Duh.

While Gideon is handsome and appeals to Gwyneth in spite of his on again, off again behavior, he is an annoying character who accepts the precepts of The Guardians without question.  Gwyneth, on the other hand, questions many things, including the worshipful attitude toward St. Germain and the society's anger at the rogue Lucy and Paul.

Overall, this book is probably best suited to the lower end of young adult readers.  The third installment (the English translation, that is) should be available in 2013.
Posted by jenclair at 4:00 PM