The Boy Who Stole from the Dead by 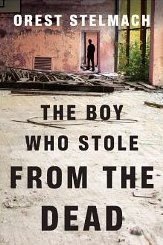 I think the most interesting thing about this book concerns the timing.  When I read it theRussia/Crimea/Ukraine situation was still in progress, and the referendum had not yet passed.  Now that the referendum has passed, the UN has declared it invalid.  The international situation has not improved.

How much do you know about the Ukraine?  I knew nothing until reading this novel, but the novel and some subsequent research have increased my knowledge somewhat, especially since the Ukraine has had such a large presence in the news lately.

The Boy Who Stole from the Dead (the Nadia Tesla series, Book 2) continues the story begun in The Boy from Reactor Four.  I have not read the first novel in the series, but although I was missing some background, it didn't impact my understanding of this novel.

From the book description:
Bobby Kungenook, a mysterious seventeen-year-old hockey phenom
from the Arctic Circle, is accused of murder in New York City.
Bobby’s guardian, Nadia Tesla, knows his true identity.
If his secret gets out, it could cost him his life....

The book is suspenseful, as Nadia Tesla carries out an international investigation to find evidence that will exonerate Bobby.

Some interesting things mentioned in the novel that I Googled to find out whether or not they existed:

An ARC ebook from Thomas & Mercer.  Read in March; rev. scheduled for April.