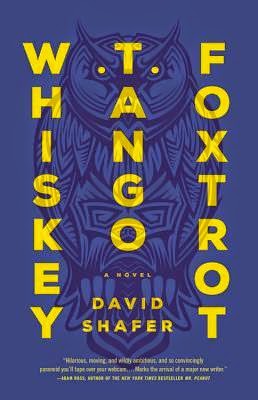 First, I must make clear that my first impression was not my last.  I picked the book up, read a little, put it down, read something else--several times.  The beginning was a slow bit of background about each of the three main characters, and I was almost ready to give up and call it a DNF.

Second, I'm so glad I didn't give up because about 100 pages in, I was hooked.  It is an imaginative and far-fetched tale that sounds very futuristic, yet...despite the fictional aspects, there is always our knowledge of how vulnerable institutions and individuals are in this cyber age. We all have questions about how much power we accede to the digital world even as we have learned to rely on all the benefits that same world offers us.

I know the lengthy character exposition at the beginning plays a role, but I do wish it had been a little less lengthy.  Yet, as the plot began to take off, I became attached to Leila, Leo, and Mark (OK, not so much to Mark).

The book has a great conspiracy angle and provides a cautionary tale concerning how much information we reveal personally, as well as what our purchases, health providers, banks and other institutions reveal about our lives.

One of those unusual books that people love or hate (note the 5 star vs 1 star reviews with little in between).  I ended up being on more middle ground, but toward the higher end.  It was a near miss, because I truly considered abandoning the book before the story took off for me.  Glad I saw it through.

The conclusion isn't conclusive, so I expect there will be a follow-up to this one.  I will greedily consume the next one.

Selected by NPR, Slate, and Kirkus as one of the Best Books of 2014