I've taken a blogging break for the last several weeks.  It wasn't intentional, but somehow events kept interfering, and I found myself thinking less about blogging.  I always have several months of reviews scheduled, so I knew that I'd have several posts ready to break through despite my absence.

I've done some gardening when it wasn't raining.  We have had way too much rain this year. After several years of drought, having so much rain for the last few months has been a surprise--initially appreciated.  Then the combination of our own rain and the rain in Oklahoma and Texas had the Red River rising to flood stage...then past flood stage, flooding all that was in reach of the river's expanding banks.  Early June spelled disaster for many. 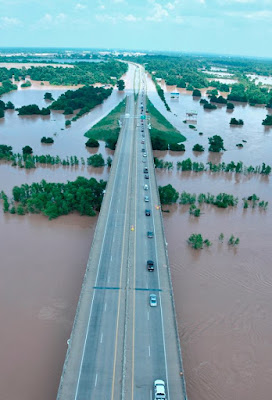 The water is mostly gone now, but the clean up continues.

We are fortunate not to live in the flooded areas, but it was both amazing and horrifying to see the normally well-contained Red spill over its bank and destroy so many homes.

Because I couldn't work in the garden, my reading became unusually obsessive.  Now in July, it is so hot and the humidity so high, that at 7:30 AM the sweat burns my eyes and by 10:00, I'm bedraggled, debilitated, almost prostrate with exhaustion--ready for a shower, air conditioning, and a book.  And still facing so many gardening tasks that didn't get done in the spring.  If the humidity is 60% or less, we rejoice.  Right now, my Weather Bug app says 94% humidity at 8:00 AM.

At any rate, I spent most of June reading like some kind of crack addict.  Right now I have 12 reviews scheduled (most of which were June reading) for between now and October (keeping in mind their publication dates)...and probably that many left to write.

So here are some quick reviews of books I purchased and read last month.  Since they are not ARCs or NetGalley ebooks, no need to schedule them. 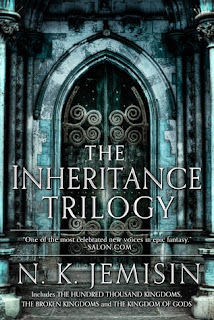 The Inheritance Trilogy by N.K. Jemisin.  The trilogy consists of 3 novels:  The Hundred Thousand Kingdoms, The Broken Kingdoms, and The Kingdom of the Gods.

Whoa!  The gods in these novels are the powerful, petty, flawed, unreasonable, impetuous, interfering, often malicious kind.  They resemble the Greek gods with all of their flaws and destructive behavior--intriguing, but frightening.  Each novel in the trilogy is connected, but emphasizes different characters; the role of Sieh the Trickster, however, is important in all of them.

The Hundred Thousand Kingdoms and The Broken Kingdoms were awesome, but The Kingdom of the Gods was less appealing and too long with occasional pacing problems.  There is also a novella (The Awakened Kingdom) included in this omnibus that is less connected, but interesting.

Overall, The Inheritance Trilogy is more a modern take on myth than epic fantasy, but it is a strange, imaginative, fascinating, and original world.  Jemisin has created a character-driven trio of novels set in a curious world with eccentric gods and mortals.  More please. 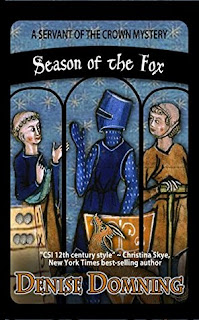 Season of the Fox by Denise Domning

I loved the first book in A Servant of the Crown series (Season of the Raven) and was eager to continue.

Book Description:  A wealthy merchant has been murdered in his own home, and the suspect has fled to sanctuary in a local church. Enter Sir Faucon de Ramis, the king’s new Servant of the Crown in the shire, to solve the murder, assisted by his prickly secretary, Brother Edmund.

As Faucon begins his hunt, the shire’s new Crowner finds himself in the upside-down world of a woman’s trade. Not only does the merchant’s wife own the business—unheard of!—the suspect is the daughter’s betrothed, or so the town believes. But what about the bloody shoe prints and missing tally sticks, and what does the sheriff have to gain?

As much as I loved the first in this series, I was a little disappointed with this one.  What was missing?

The first book had much more about the characters and the medieval world they inhabit (with such interesting historical details that I found myself Googling for more information about "hue and cry"-- its historical significance and all that was involved in the process, Keeper or the Pleas, Coronarius/Crowner/Coroner, and various other medieval laws and practices).  Season of the Raven was character driven with excellent world-building, while Season of the Fox is more about the plot with less character development, although there are interesting elements about sanctuary and women who managed their own business.

I enjoyed it, but while I gave Raven 5 stars on Goodreads, Fox would only merit 3 stars.  It was shorter, less detailed, and lacked much of what made the first in the series so engrossing.  A good mystery, but without the same whole-world atmosphere Domning created in Season of the Raven.

Hopefully, the next in this series will return to developing Faucon, Edmund, and Brother Colin.  I'm also eager to find about about the thread that is curiously (and briefly) winding through the first two books.