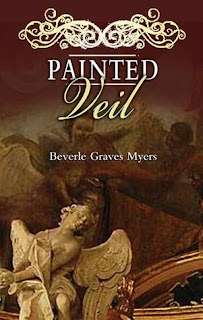 Painted Veil is actually a re-read.  I read in 2006 and liked it and have occasionally thought about it without remembering much about it except that it involved a castrato singer with a Venetian opera house.

Tito Amati has been accustomed to being the male lead, receiving plum roles with the Teatro San Marco, but he let success goes to his head, indulged himself and neglected his voice.  When another celebrated singer is brought in to play the lead in the next opera, Tito is humiliated, but recognizes his own role in his demotion.

Tito is eager to get back in form and to regain the good graces he once enjoyed with the theater's director.  when asked to locate Luca Cavalieri, the scene designer who has gone missing, Tito willing agrees.

Luca Cavalieri's body washes ashore at an inopportune moment, and now, Tito needs to discover the reason for Luca's murder...and the culprit.

The 18th century Venetian setting, the details concerning the theater and production of an opera, the role of the castrati (what a sad tradition), and political machinations all combine to make interesting reading.

Tito is a charming character who resents his demotion and his replacement, but takes responsibility for his behavior and acknowledges his rival's skill and genuine talent.  He has come to terms with his own situation as a castrato--his prized role as a singer is a result-- but still feels some bitterness about the price.  (Boys were castrated for singing in church choirs and on stage; at the height of the demand for these singers it is estimated that as many as 4,000 boys a year underwent this mutilation--often as in Tito's case--sold by their families in that hopes that their sons' voices would lift them from poverty.)


"The first openly castrated singers were enthusiastically admitted to the Vatican chapel by Pope Clement XIII in 1599 and by 1625 had completely replaced the soprano falsettists. Taking their example from Rome, the other major Italian chapels quickly sought out and admitted castrati among their ranks and their use openly spread throughout the first half of the century."  via Origin of the Castrati

Beverle Graves Myers has created interesting and well-drawn characters, placed them in a unique historic setting, and provided them with an absorbing murder mystery.