A Song of Shadows by John Connolly 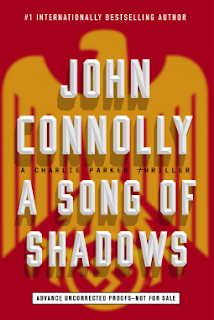 A Song of Shadows

After Wolf in Winter, readers were left wondering how the events in that novel would affect the next one.   Charlie Parker's injuries are grievous physically, but emotionally and spiritually, Charlie has a lot to deal with as well.

Plot:  Charlie is recuperating in a small Maine town.  He is recovering slowly, getting physical therapy, but still in tremendous pain.  His weakness frustrates him, and he knows that both the physical and mental adjustments he must make are going to be life-changing.

Then a body washes ashore, a neighbor seems to hiding something, and events that on the surface appear to unconnected begin to coalesce into an evil that has roots in Nazi Germany.  Parker begins to take new interest in his life as he seeks to unravel the disparate threads.

Characters like Louis (former (?) hit-man) and Angel (burglar) provide comic relief, and their dialogue is always a pleasure.  The loyalty they feel to Charlie bolsters my enjoyment of them, and the same is true of the Fulci brothers.  Other characters like Walsh and Ross, who have a much more complicated relationship with Charlie Parker, are also intriguing.  In addition to the villains in this installment, those from previous novels also make brief appearances or are referenced.

Historic digressions into Nazi Germany and escaped war criminals are necessary to continue the plot, but also interesting in purely historic ways.  I had never heard of Grafeneck which gets a one-line mention in the novel, and looking it up led me to Action T4 and eugenics --from Francis Galton, to the American eugenic movement, to Hitler's "master race."  The plot is not about Action T4 or eugenics, but I  had never heard of Grafeneck and was curious.

The war criminal elements are, however, essential to the plot, and it is interesting to see how these old men look at their lives.  They have lived much longer as "average" people in the U.S. than they did in Germany where they were responsible for the deaths of so many.

To balance the violence and brutality in the novels, Connolly includes the humor of Louis and Angel and the Fulcis, witty dialogue, Parker's compassion for those who need protection, and the depth of relationships with those he loves and cares for.

Read in June.  Blog post scheduled for Sept. 21
--------------
Update:  I read Every Dead Thing, Dark Hollow, and The Wrath of Angels right after finishing this one.  I'm going to have to admit that the books also qualify as "horror"--and the first ones are exceptionally violent.