I'm still in mourning--especially as I ordered the newest version in the largest size, and neither my husband nor I could get it to connect with our WiFi.  I wasn't as charmed with the size as I thought I would be, but if I could have gotten it to work properly, it would have been fine.

As it was, in a fit of frustration, I returned it and ordered the Fire HD 8, which looks to be an updated version of my deceased Kindle.  And wait.  Again.

I had about ten ARCs that had come in the mail to read, but so many of those that arrive in the mail unsolicited don't appeal to me.  Fortunately, there were several that did, and I will be reviewing them soon.

Some books that I read in August and September (and really liked), but have not yet reviewed because I'm waiting until closer to publication dates:

Tony Hill & Carol Jordan; if you are familiar with Wire in the Blood, the British television series, then you know these characters. I love this series, and I like where this book is taking it.  Have to admit I have been a little concerned about Tony & Carol, especially Carol, in the last couple of books, but although this one has the same tension, both characters have  to examine themselves in more detail.  And catch a killer.  A great addition to a fine series!

Land of Shadows - by Priscilla Royal; NetGalley--due out in February, 2016.  I've read and reviewed most of the books in this series.  Historical mysteries set in the late 1200's featuring Eleanor Wynethrop, Prioress of Tyndale Priory, and Brother Thomas, a monk with a secret past.

I love the historical detail and research that goes into Royal's novels.  The first one I read (The Wine of Violence- my review) was such a great introduction to the series.  By Land of Shadows, the reader knows all the characters well and has a better grasp of the political, religious, and cultural aspects of the time, and can expect an excellent mystery (based on actual events in this case) as well.

Unreasonable Doubt - Vicki Delaney; NetGalley--also due out in February, 2016.  I have enjoyed everything I've read in this series about Constable Molly Smith, and this one did not disappoint.  Delany delivers another well-crafted mystery with great characters.

Our dragon boat races were canceled this year because of the Red River flooding in June, but we have sponsored a boat crewed by our son-in-law Chris and friends with great success for several years.

I have a draft, but haven't scheduled it yet; keep this one in mind.

That's Chris in the in the front row with sunglasses. 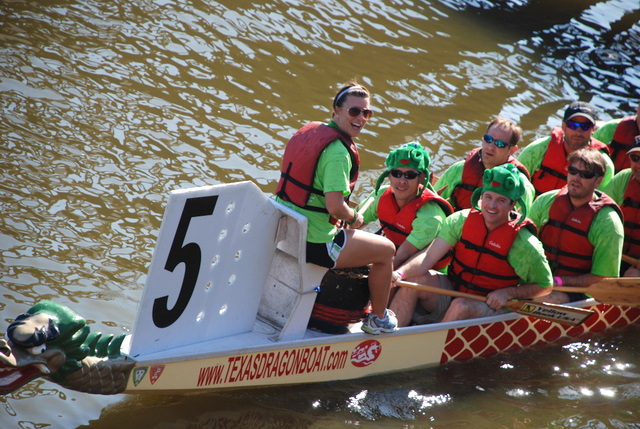 Without my Kindle, how have I been spending my time?  Weeding.  It was too damn hot during the summer with so many days 100+.  Making more Eccentric characters for Halloween.  You can see some over at Bayou Quilts.  I'm still working on more.
Posted by jenclair at 10:38 AM