A Rustle of Silk and Death Notes 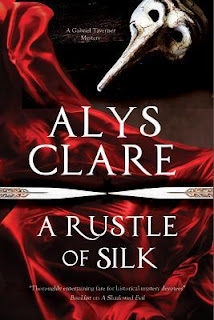 A Rustle of Silk by Alys Clare introduces a new historic mystery series featuring Gabriel Taverner, whose life as a ship's surgeon is no longer possible after a head injury results in irremediable sea sickness.

He settles in rural Devon near his family and begins life as a country physician.  Asked to accompany the local coroner and give his opinion on a decomposed body, Gabriel discovers a connection that could have a serious impact on the sister he loves.

Overall, a quick read of a new series that may improve as it develops.  I hope to see more weight given to several of the secondary characters in the next one.

I've only read a couple of books by Alys Clare, each one a part of two separate medieval mystery series she writes.  I was glad to be reminded that I'd enjoyed those books. 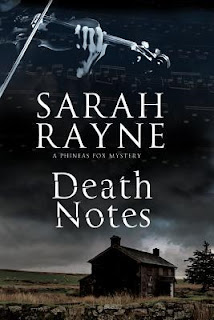 Death Notes by Sarah Rayne is another debut series.

From Severn House:  Introducing professional researcher Phineas Fox in the first of a brand-new series of chilling mysteries.
Phineas Fox has mixed feelings when he’s asked to research the infamous 19th-century violinist Roman Volf for a TV documentary. Hanged for his part in the assassination of Tsar Alexander II in 1881, Volf was a notorious criminal and womaniser, whose glittering talent was undermined by his scandalous private life. However, on uncovering evidence which suggests that Volf could not have been involved in the Tsar’s murder, Phin’s investigations lead him to the west coast of Ireland – and a series of intriguing, interlocking mysteries reaching from 1881 to the present day.

A number of twists in this one, and as many involve the present day as the past.