Although the Women Police Service was founded in 1914 to deal mainly with pimps and prostitution, the founders of the WPS took advantage of the war situation by replacing men who were involved with the war effort in the hope that women could continue advancing after the war.

Female officers were allowed to go into brothels, nightclubs and betting houses to observe and gather evidence of untoward behavior, but at the first sign of crime being committed, they had to call in male colleagues. They were not allowed to carry handcuffs unless instructed to by a senior officer, and were not allowed to make arrests until 1923.  (source)

The novel takes place in 1924 in Leeds.  WPC Lottie Armstrong and her partner WPC Cathy Taylor are eager to take on larger policing roles, but must deal with the prejudices of many men on the force.   Lottie's ability to talk to people results in good information, and DS McMillan values her assistance, but not everyone appreciates a woman exceeding her prescribed role.

I enjoyed doing a little more research on women in the police at that time period in the UK. Blood and Bone is the third entry (but the first I've read) in Giambanco's Alice Madison series set in Seattle.

Alice and her partner Detective Sergeant Kevin Brown find themselves on a case that has some crossover with one of the previous books.  A bit complicated at times between two story lines.  Not bad, but could have used either a bit more back story and/or fewer complications. 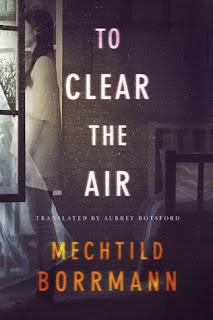 To  Clear the Air


First an old man from the small German village of Merklen is murdered, then another.  Clearly there is a connection to a decades old crime, but no one in the small village is much inclined to talk about it.  Inspector Peter Bohm needs to prevent another murder, but in order to do so, he needs information that the villagers are reluctant to provide. Someone is seeking revenge...or justice.

To complicate matters, Peter's marriage is unsettled.  His wife left town to attend a conference, then decides to stay away to give some thought to her situation.

To Clear the Air was Borrman's debut novel, and she has written two, but I don't know how many have been translated.


"She [Borrmann] has been a full-time writer since 2001, and To Clear the Air was her first novel. Silence, her third, won the Deutscher Krimi Preis in 2012 for best crime novel and was nominated for the Friedrich Glauser Prize."