Ann Cleeves New Series; The Dead Witch on the Bridge and The Familiars

I've enjoyed Ann Cleeves' Shetland series with Jimmy Perez (which she recently concluded) and her Vera Stanhope series (long may it continue), but she also has a new series in the works! 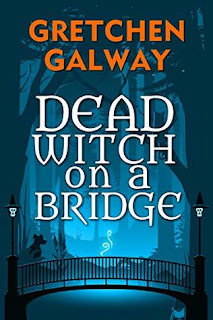 Gretchen Galway's Dead Witch on a Bridge is the first in a series (Sonoma Witches #1), a kind of cozy witch mystery.  Alma Bellrose failed as a demon hunter for the Protectorate and now lives in the quiet and isolated community of Silverpool in the redwood forest.

When her former boyfriend is murdered, Alma finds herself in an awkward situation that could (and does) turn dangerous.  Various characters are introduced that will no doubt be further developed in future books, but my favorite is Random, the dog that appears on the morning after the murder and becomes quite attached to and protective of Alma.

The first in this series was fun and has interesting possibilities. :) 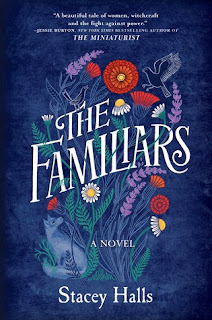 The Familiars by Stacey Halls is a much more serious book that takes a fictional look at the Pendle Witch Trials of 1612.

Most of the characters were real people, and Stacey Halls creates a rich and frightening narrative with the character of Fleetwood Shuttleworth.  Fleetwood, a genuine historical figure (as imagined by Halls) is a fascinating young woman whose character grows and develops throughout the novel.

Having suffered three miscarriages, seventeen-year-old Fleetwood is suffering through her fourth pregnancy, ill and frightened that she will once again loses the baby.  After finding a letter written to her husband by a doctor who examined her, Fleetwood realizes that she may not survive this pregnancy, and her fear and distress is heightened.

When Fleetwood meets Alice Grey, she discovers that the young woman is a midwife.  In her desperation, she insists on hiring Alice to care for her and to deliver her child, bucking the advice of others who believe a more experienced midwife should be engaged.

In the meantime, Alizon Device is arrested and accused of murder by witchcraft.  Much like in the Salem witch trials, the frenzy of accusations increased and spread.

As she loses trust in almost everyone else, Fleetwood comes to trust Alice Grey,  and when Alice is also caught up in the accusations and imprisoned, Fleetwood is determined to save her.

What resonates so strongly in the book is the role of women--obedient wives, powerless over their own wealth; the importance of producing an heir and the dangers of childbirth; women whose opinions are ignored, and who are easily blamed for things that have natural causes.

Initially, I was distressed and worried by Fleetwood's vulnerability, but the book moved
into a compelling story as Fleetwood and Alice work together to insure Fleetwood's health and a successful childbirth.   Then Fleetwood does her best to prevent Alice from facing the gallows after her arrest.

There is also an understated, but intriguing element of the supernatural that gives some ambiguity to the story.  I liked the way this was hinted at, rather than emphasized.

Interesting tidbit:  Sharon Bolton's The Craftsman is a suspenseful modern take on Pendle Hill and the witches.