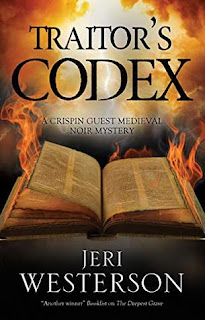 Another outing for Crispin Guest, The Tracker of London.  In this adventure, Crispin is given a dangerous codex which threatens the dogma of the Church.

As usual, the depiction of the characters makes them believable, three-dimensional individuals.  As Crispin has grown more accepting of his fall from grace, his character has evolved and his life has developed in positive ways.  In Traitor's Codex, Crispin once again must confront Richard II with more understanding on the parts of both men.

Westerson's research is wide-ranging and thorough, weaving both real personages and fictional characters skillfully through a series of mysteries in which Crispin is engaged to solve various crimes.

Each book in this series, designated as Medieval Noir, presents an intriguing mystery with fascinating historical elements, and I have enjoyed them all.

Read in January; blog review scheduled for May 22.