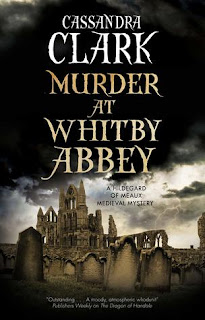 I enjoy medieval mysteries and even if had not already enjoyed several of the Sister Hildegard books, it would be hard to resist a mystery set in Whitby Abbey.

Hildegard of Meaux is sent to Whitby Abbey to bid on a a lock of St. Hild's hair, a relic purported to be more than 600 years old.  The year is 1389, and the ancient relic (if genuine) would be a prize for who ever succeeds in the bidding war.

Accompanied by Father Luke and Gregory and Egbert (militant monks who have been on the crusades), the entourage from Meaux find a very different and unpleasant atmosphere at Whitby--and that is before the body of a monk is discovered.  Things get decidedly worse and dissension between the abbey and the town intensifies.

A Medieval whodunit with a strong female lead, an interesting plot, and a glimpse of the struggles to keep the Church honest. 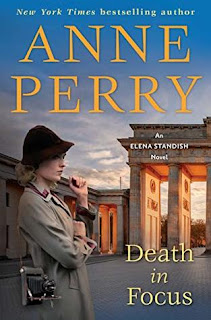 The first in Anne Perry's new series is set in 1933 and gives some insight into the period in which Hitler has built up his power.  In England, Oswald Mosely and his British Union of Fascists have gained influence.  Fear of another war with Germany has many concerned, but the attitudes vary from those realizing the danger of Hitler and those admiring him and his policies.

What I liked:  Several quotes near the beginning.

"Fear begets violence and hatred," he said.  "it's the easy answer.  Blame someone else.  blame the gypsies, the Jews, the Communists, anyone but ourselves.  Get rid of them, and it will all be fine."

"Hitler is either assuming more power himself or appointing bloody awful men to do it for him.  Himmler, for example."

'I suppose every culture has them:  men in bondage to their own inadequacies, who will never be satisfied because the emptiness is inside them."

"They're always there, the misfits.  It's the measure of a leader, which men he picks for the next tier of command...."

"What you see, and allow without a fight, is what you become yourself.  What is the moral difference between the man who burns his neighbor to death, and the man who stands by and watches him do it?"

"...now winning is the only objective!  And the more you win, the more you justify it, until the whole idea of right and wrong disappears and only winning matters."

What I didn't like:  Everything else was a disappointment.  This is unusual for an Anne Perry book, but the plot and the conclusion were improbable and the characters were thin.

The quotes, however, from the early part of the book (and I didn't include all of them) seem as appropriate in today's climate as they did in 1933.