At First Light by Barbara Nickless

In 2020, I reviewed the first book in Barbara Nickless's Sydney Rose Parnell series Blood on the Tracks).  I'd actually started with the 4th book and fallen in love with Clyde, Sydney's Belgian Malinois--which meant I had to go back and pick up earlier books.  Sydney and Clyde are both veteran's of the Iraq war, and Sydney is currently an agent with the railway police.

OK, I loved these books (Clyde is as important to the series as Robo is to Deputy Mattie Cobb in Margaret Mizushima's Timber Creek series) and have been waiting for an addition to the series... 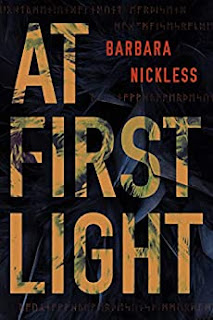 which hasn't happened yet.  However, Nickless has begun a new series featuring Dr. Evan Wilding, a forensic semiotician.

When Detective Addie Bissett is called to a murder scene with strange symbols and glyphs, she calls her best friend Dr. Evan Wilding in.  Evan recognizes the glyphs as runes and begins his attempts to transliterate the message left by the killer.

I admit that much of the attraction for me was the connection to Beowulf, and I'm unusually attracted to the Beowulf epic and have read several different translations.  The kennings and rhythms of the ancient poem have always appealed to me--no doubt partly because of Tolkien's essay Beowulf:  The Monsters and the Critics.  And yes, because of John Gardner's Grendel, the delightful little book that gives Grendel's point of view.

(In one of those examples of synchronicity, in a recent purge of books, I relocated my ancient copy of the Anglo-Saxon Primer, my college copy that has the teeth marks of Emily Milk Paws, the puppy that chewed on anything of mine she could if I was not there.)

Anyway, I enjoyed the book as much for the connections to the Viking and Anglo-Saxon literature as anything else.  I liked Addie and Evan, who btw is a little person, and hope the next book is as interesting.

I don't think At First Light is as good as Nickless's Sydney Rose Parnell and Clyde books, but it is still a promising new series.  I pre-ordered it and it was delivered right away before publication date.

This shouldn't come as a surprise for readers, but Morality Illustrated in Stories Can Alter Judgment  for Early Adolescents.  via Neuroscience News

Isn't it a shame that our politicians can't set a better example?  In such a short time, politicians have made their marks by saying  gratuitously nasty remarks about each other and anyone with whom they disagree.  Does that influence the general public?  Yes.

It is one thing to disagree or to have another opinion about how to do something, but quite another to depend on disrespectful and malicious remarks in ad hominem attacks.

If emphasizing care and fairness can influence young children, so can the opposite (which they hear way too often from the news and from adults).