Between Family, Sherlock Holmes and the Three Winter Terrors, and The Beast in View 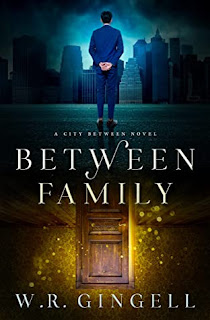 Last year, Ashley reminded me of the Between series that I'd started a couple of years ago but missed the next books as they were published.  I didn't even realize I'd read the first book until I started reading it!  (Do you ever do that?  Forget the title and then read the first paragraph and realize you've read the book?)
Anyway, thanks to Ashley, I re-read the first book (and enjoyed it again) and zoomed through until I was caught up to book 7.  Waited for book 8.  Then waited for book 9!
The Between books are ridiculous and fun!  I like urban fantasy and love the characters and the absurdity of the Between books--each one is outlandish, suspenseful, comical, and addictive to those who love urban fantasy.
Between Family (#9) continues the suspense and the Heirling Trials begin.  Morgana is forced into a decision that ultimately, I don't think she regrets as it is a matter of survival, not only for her, but for her friends. Pet's "emotional support" Korean vampire is still locked out of the house.  The house is, of course, sentient.  Is Pet an heirling or not?  And there is Athelas.
I was thinking throughout that this was the final book and was preparing myself for the conclusion--but no, there is one more!  While I hate for the series to conclude because it has been so much fun, I can't wait for #10.
If you are interested in this series, start with the first book.  Between Jobs will set you on the journey, introduce the main characters and the mystery, and make you laugh and wonder. 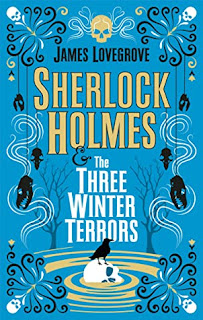 The Three Winter Terrors are three entertaining linked stories.
From Description:
1889. The First Terror.At a boys’ prep school in the Kent marshes, a pupil is found drowned in a pond. Could this be the fulfillment of a witch’s curse from four hundred years earlier?1890. The Second Terror.A wealthy man dies of a heart attack at his London townhouse. Was he really frightened to death by ghosts?1894. The Third Terror.A body is discovered at a Surrey country manor, hideously ravaged. Is the culprit a cannibal, as the evidence suggests?
I rarely miss a Sherlock Holmes pastiche and enjoyed this one. 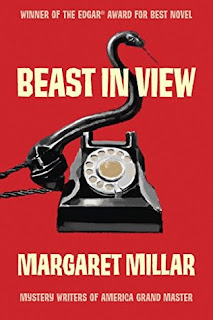 Helen Clarvoe, a thirty-year-old woman, lives in a second-rate hotel despite having inherited her father's money and investments.  Estranged from her mother and brother, Helen has few acquaintances and lives a quiet reclusive life. When she receives a phone call that claims to predict her unpleasant future, she is unnerved and frightened.
She contacts Paul Blackshear, her father's investment counselor for help.  Although he agrees to help despite his reluctance, Blackshear becomes quite involved in his investigation as the situation becomes curiouser.
Beast in View, published in 1955, has the feel of the time period in setting and characters.  It won the Edgar for best mystery of the year in 1956, beating out The Talented Mr. Ripley, and is also named one of the Top One Hundred Mystery Novels of All Time by the Mystery Writers of America.
The writing feels dated to the 1950's in culture and style.  A suspenseful, psychological novel, Beast in View connects to something I would mention, but it would definitely give the plot away.
Margaret Millar's husband Kenneth Millar wrote under the pseudonym Ross MacDonald, and the couple are considered among the best of their generation's mystery writers.
I can't say I loved Beast in View as the style and setting are not my favorites, but the psychological aspect is impressive, especially for the 1950's.   Millar kept the twist away for most of the book.  I may look for another of Millar's books to see if they grow on me, this has certainly happened before.
Soho Syndicate
Psychological Suspense.  1955, 2015.  Print length:  186 pages.
Posted by jenclair at 8:09 AM