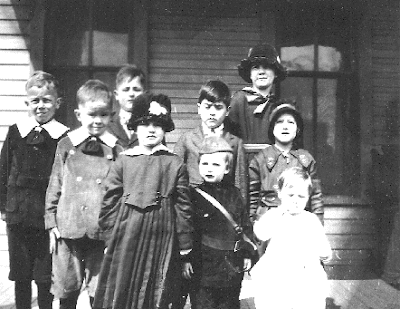 One of my goals in my Renaissance Mind self-challenge was to watch 2 documentaries from Netflix a month. Last month, I watched 3-- two were interesting, the third was not so great.

The other night, I watched this month's first documentary, and it was fascinating! I'd never heard of this particular segment of our American history, and The Orphan Trains was so fascinating that I made Fee watch it with me the second time.

During the 1850's, a young minister named Charles Loring Brace was stunned and saddened by the abandoned street children in New York. I've read about these abandoned children many times, but was totally unaware of Brace's solution to the problem. He formed the Children's Aid Society and began shipping the children to farming communities in the West, hoping that loving Christian families could take the children in and save them from the horrible conditions they faced alone on the streets of New York.

Everything was well-documented. Names of children, where they went, entries in Brace's journals, letters from the children and their new families, etc. From the 1850's until 1929, the Orphan Trains carried over 150,000 children from New York to points west.

Some of these situations didn't work out so well; despite the efforts of the Children's Aid Society, many potential families were no better vetted than foster families are today and the check ups on situations were difficult and spotty because there were so many placements. Some families undoubtedly saved the lives of many children; other situations must have been terrible disasters. Photographs of the children taken by Brace's photographer and by the families that took the children in tell a remarkable story on their own, but the interviews with many elderly individuals who rode the trains to new homes from the early part of the 2oth century are both engrossing and touching.

Brace worked hard to save the children who wandered bare foot and slept in door ways, but he grappled with the dilemma of what to do to help:

"When a child of the streets stands before you in rags, with a tear-stained face, you cannot easily forget him. And yet, you are perplexed what to do. The human soul is difficult to interfere with. You hesitate how far you should go."

More information can be found here (and these are just a few sites):


Cross-posted at Bayou Quilts.
Posted by jenclair at 9:56 AM