The Gift of Rain 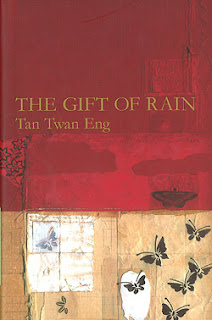 I actually finished this book before finishing the last several books I've recently reviewed, but wasn't ready to write about it. Now that it has fermented a while in my thoughts, I'll attempt the review.

First, this is Eng's debut novel and it made the long list for the Man Booker Prize in 2007. Eng's prose is elegant and flowing, and he quickly and skillfully sets the scene so well that I immediately felt drawn into the atmosphere of the island of Penang, Malaya.

Philip Hutton, an old man in his seventies, has lived on the island all of his life. The arrival of an unexpected visitor forces (or allows) him to review some of the most important events in his life: his relationship with his family; his friendship with his Japanese mentor Endo, an Akaido master; and the occupation of Penang by the Japanese during the war.

The complex relationship between Hutton and Endo is the crux of the novel. Endo-san, a Japanese diplomat, trains the young Philip in Akaido and introduces him to Zen Buddhism. This training aids Philip in many ways and helps prepare for him for the eventual declaration of war and the occupation of the island by the Japanese.

Endo's interest in Philip, however, has subtle indications of manipulation and self-interest. The reasons are two-fold: first, a past-life connection, and second, although Malaya denies the possibilities of war and occupation, Endo is well aware of what is coming. His friendship and love for Philip are genuine, but the circumstances of his position and personal history are incontrovertible.

One important facet of the novel deals with some fascinating details of the island itself, the pre-war attitude and the brutal occupation. In a historical sense, Eng's portrayal of the time period is absorbing and informative. (I've known a couple of men, contemporaries of my father, who survived Japanese prisoner-of-war camps and the Bataan Death March in the Phillipines, so I had a personal interest and curiosity.)

There are so many moral ambiguities in this novel about right, wrong, survival, and betrayal. I couldn't write the review immediately upon finishing the book because my mind was so busy considering these ambiguities.

It is also a novel about growing up. Philip is the youngest child in his family, the child of a second marriage, the child of mixed parentage (his mother was Chinese)...and he felt always felt out of place. His journey to adulthood involves resolving some family issues over three generations. This was my favorite part of the novel--watching Philip begin to understand more about his siblings, his parents, and his grandfather.

The disturbing portions of the novel leave the reader on his own; Eng leaves the decisions up to the reader. Even Phillip, the narrator, leaves events and judgments open.

Betrayal, deception, collaboration, and human brutality are always a part of war, but they leave us wondering about what our own reactions to circumstances would be. Eng handles these elements beautifully, without attempting to manipulate our emotions.

The cruelty that occurred during Japanese occupation is presented, but not graphically dwelled on; Eng presents scenes of horrific inhumanity because these things occurred, not to wring maudlin tears from his readers.

"Memories--they are all the aged have. The young have hopes and dreams, while the old hold the remains of them in their hands and wonder what has happened to their lives. I looked back hard on my life that night, from the moments of my reckless youth, through the painful and tragic years of the war, to the solitary decades after. Yes, I could say that I had lived my life, if not to the full then at least almost to the brim. What more could one ask?"

I suspect this novel will be on my list of favorites for the year, partly because of beautiful writing, the evocative descriptions, and the character development, and partly because it left me faintly uneasy, still pondering events and relationships.