I've been reading several books at once (including Bujold's The Sharing Knife), but when I got my copy of the Queen of Attolia, the others had to step back in line because as soon as it arrived, it had my complete attention.

I finished it in short order, reviewed it, and scheduled the review for tomorrow as I'll be heading for the country later today. Even though I might take my lap top, the connection is so slow down there that I get impatient. 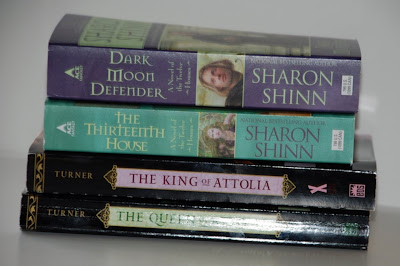 I have several other fantasy series that I've begun and am waiting for future installments, and Kailana also sent me a list of some her favorite fantasy titles that I've added to my list.

Fantasy has some of the characteristics of crack...
Posted by jenclair at 7:07 AM

Labels: fantasy, once upon a time challenge