Hot House Flowers and the 9 Plants of Desire 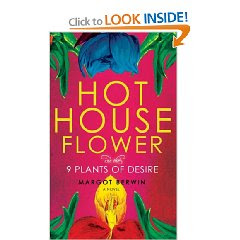 Berwin, Margot. Hot House Flower and the 9 Plants of Desire.

I actually finished this over a month ago, but didn't get around to a review. Started well, but went down hill. I'm not a great fan of magical realism, although I do occasionally enjoy some books in the genre.

This was not one that I cared for. Although the initial chapters held my interest, the characters were one-dimensional and the plot, despite its efforts, didn't hold together. The "fantasy" created ended up both wild and unsatisfying.

However, once again, I find myself in the minority:

Review on Amazon from Publishers Weekly: Berwin delivers a bangup debut packed with adventure, betrayal, love and, naturally, rare plants. New York ad woman Lila Nova, increasingly disillusioned with her job and the city, becomes enchanted by David Exley, a handsome guy selling plants at a green market. Soon, she's hooked on him, and her budding fascination with tropical plants leads her to a Laundromat that has a rare fern displayed in the window. Proprietor Armand quickly befriends Lila and gives her a trimming from the fern to take home, telling her if it forms roots, he'll show her the nine special plants he keeps in the back room. When Exley sees the fern trimming, Lila tells him about Armand's special plants, and soon the plants have been stolen and Exley has disappeared. Armand guilts Lila into coming to Mexico with him to find replacement plants, and there's magic, romance, greenery and greed as Lila and Armand venture through the Yucatan, hooking up with potential love-interest Diego and running into the devious Exley. It's a fun page-turner—escapist and wonderfully entertaining.

I found turning the pages an effort and was not entertained.