Veil of Lies is a medieval mystery set in the same period as Cassandra Clark's Sister Hildegard series (The Red Velvet Turnshoe, Hangman Blind, The Law of Angels).  In 1383, Crispin Guest is a disgraced knight, stripped of rank, lands, and possessions after being implicated in a plot against Richard II.  His mentor, John of Gaunt, managed to save his life, but for political reasons abandons Guest to his fate.

Guest has established himself as a man who finds things and has earned the title "The Tracker," but his skills just barely keep him in food and lodging.  In this debut novel, Guest has been hired by a wealthy merchant, but before he could report back, the merchant is found murdered in a locked room.

For various reasons, Guest pursues this new conundrum and finds puzzle after puzzle to pursue.  Crispin Guest is full of flaws and is having serious difficulties connecting with individuals who are so far below his previous rank.  His previous friends (including John of Gaunt, the Duke of Lancaster, and Geoffrey Chaucer) are no longer available to him because of his connection to the treasonous plot against the king.  Associating with them would put them in danger.

Chaucer is actually a mere mention, but I have hopes that his character will become more important in the next two novels in this series.

I enjoyed the mystery, and even if I have some criticisms, I look forward to the next one in the series. 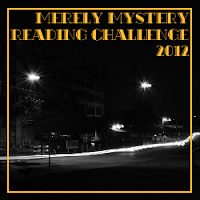 First in the Merely Mystery Challenge.