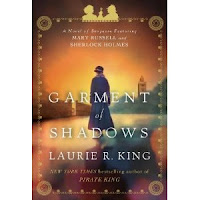 Garment of Shadows features Mary Russell and Sherlock Holmes and is scheduled for release in September.

I'm happy to say that I did, indeed, enjoy Garment of Shadows which takes place right after Pirate King (which did not keep my interest).  In fact, Mary disappears from a Pirate King film location and reappears in Morocco.  She awakens in a strange room with no idea of who she is or how she got there.  Ever-resourceful,  Mary acts on instinct when soldiers arrive at the building and makes good her escape.  Since she doesn't know who she is or how she was injured, she isn't sure where to go to find the answers, but she discovers several interesting talents the she possesses (picking locks, etc.), and she acquires a young ally as she moves through the twisting streets and alleyways of Morocco.

Meanwhile, Holmes, unaware that Mary is missing from the film crew of the Pirate King, is visiting a friend and distant cousin in Morocco and learning about the threats of war, about the Rif revolt, Spain's use of poison gas against the Rif , massacres on both sides, and other internal and political difficulties of the 1920's in Morocco.   The historical facts are especially interesting to me as I didn't know much about the politics of this region, but the facts are seamlessly blended with the fiction.

This was a typical Russell and Holmes--fast-paced, good historical information, tightly plotted, old friends, and interesting new characters.  A fun read and a relief after the disappoint of the previous novel.

If you like this series, look for it in September.

This was from Netgalley, and I read it on my Kindle.

---
Oh, and we've discussed at different times all of the analogues and pastiches of  concerning Holmes and Watson, books, television series, and films, and recently  I discovered a blog by Dr. Watson which is interesting.  This post lists some recent and yet to be released books, audio books,  and some upcoming Sherlock films.