The Second Rule of Ten by Gay Hendricks and Tinker Lindsay 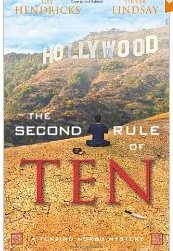 I was quite excited to be offered The Second Rule of Ten by Wiley Saichek of The Book Report, as I received The First Rule of Ten from Net Galley a while back and really enjoyed it! (reviewed here)

Hendricks and Lindsay collaborate well in these novels about Tenzing Norbu, a former Tibetan monk who grew up partly in Paris with his mother and partly in Dharamshala with his father, one of the head abbots in a small monastery.

An unusual mixture of cultures, the young Ten Norbu dreamed of becoming a detective as he read the forbidden stories of Sherlock Holmes at night and practiced the principles of Buddhism under the rigid supervision of his father by day.

At eighteen, circumstances sent Ten to Los Angeles, and in time, into the police department--quite a physical and spiritual journey from the monastery.  In the first novel, Ten is making a new transition, leaving the police department and achieving his goal of becoming a private detective.

The Second Rule of Ten begins with Ten's failure to communicate with his two best friends at the monastery during meditation; his letters, too, have been returned to sender.  The two friends, who remained in the monastery, help keep Ten grounded, and he is disturbed to find communication cut off.

He is also interested in a case of his former partner's, the death of a well-known, although not well-loved, Hollywood mogul.  His interest is partly due to his having found Marv Rudolph's runaway daughter some months earlier.

Ten's second rule:  "...to challenge my old, limited models of thinking.  To be willing to release them."

He finds that the second rule figures largely in the Marv Rudolph case and in his poor relationship with his father, the abbot.

I really enjoyed both of these novels.  They offer an unusual approach to the mystery genre, a little zen, a little mystery.