Harm None by Will North 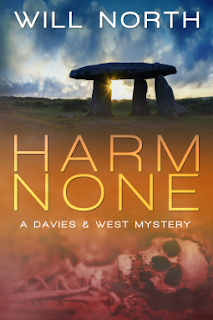 An archaeological team unearths the remains of a child at the Iron Age site they have been investigating.  The remains are not ancient, however; they are those of a child that has been missing for a year.

Although I liked the main characters Davies and West, the most interesting characters were actually secondary characters:   Tamsin, the village witch (or wise woman); Tegan, her young assistant, and PC Teresa Bates.

The prologue, from Tegan's perspective, through me off a bit; it reads as if you are beginning a children's mystery/fantasy.  Although unexpected, I was captivated by Tegan's voice and quite willing to continue.  However, Chapter One is third person, quite different, and follows DS Morgan Davies' arrival at the crime scene at the top of Dewes Tor.  The result is a change in perspective and style with each switch.

I enjoyed Harm None and allowed myself to set aside a few nit pics, as it is a debut series. There are plenty of back-stories hinted at for several characters that should be developed in future books, but I certainly hope Tamsin and Tegan are not abandoned.

"An ye harm none,
Do what ye will."
(from the Wiccan Rede)